One of the many things that differentiates Littlest Pet Shop from My Little Pony, is the setting.

One may think that’s a superficial distinction, but it’s not. The world of Equestria is a land of magic, unicorns, and fairy tale castles; where everyone is nice to each other, and nothing ever goes wrong.

In contrast, Littlest Pet Shop takes place in (for the most part) the real world. Downtown City is located on a contemporary Earth, with modern digital technology and no magic (for the most part). It’s also a world where, to put it bluntly, shit happens. Things aren’t perfect, and bad things do happen. Yes, it never happens on-screen, because this is a saccharine kids show. But given the fact that this is ersatz-New York, I get the feeling that something very terrible did happen in that town about thirteen years ago.

Basically, the difference in setting gives us a difference in tone. Even if it’s just an implied tone. And this is even portrayed on-screen in the attitudes of some of the characters.

In Equestria, everyone is nice. In the real world, most people are dicks; And this has been portrayed on Littlest Pet Shop quite extensively. There’ve been con-artists, violent bullies, thieves, complete tools, plagiarizers, and serpentile delinquents on this show. Then there’s the recurring jackass we have in the form of the Biskit Twins, who constantly make life miserable for our hero. And while Equestria does have it’s share of bad apples, I can name them on one hand. They’re not really a large cohort.

And because of all this, I believe Littlest Pet Shop has cemented it’s role as the show where people suck. And I’m not sure if this is a good thing. Oh sure, it’s more realistic, and certainly kids need to learn that not everything is sunshine and rainbows; but I don’t think it’s a good idea to make children completely jaded and cynical either. Which could probably happen because of this. Especially with regards to a recent episode, where the designated prick didn’t appear to be a prick… at first.

Meet Tangier. A model who, along with Russell and Zoe, is participating in a photo-shoot for a major fashion magazine.

He introduces himself and seems very friendly and approachable. But Zoe is a bit suspicious, for some reason. Much like I would be.

So, before their first session, Tangier tries to give Russell some words of encouragement. And then, when Russell tears his costume, Tangier quickly finds a replacement.

So all is not lost, right?

Well, actually, no. Since Russell suddenly has a sneezing fit out of nowhere! Which is completely unrelated to anything that happened earlier okay that’s a lie…

You see, it seems that Tangier decided to play a little prank, and sabotaged the replacement costume with sneezing powder.

So yes, Tangier acts like a nice guy, and your friend; but in reality, he’s a complete jackass. And this is why we can’t have nice things!

You see, I don’t trust people when they’re nice. If someone I’ve never met is nice to me, I get paranoid. And no, I’m not sure why. I know it makes no sense, but it’s not really something I can control. It might even be due to some early childhood trauma that I just can’t get over. But looking at shows like this, it seems as if my paranoia is justified; Since people who act nice are likely to just betray you later on down the line. So basically, this episode managed to justify severe social anxiety.

Alright! Admittingly, trusting everyone is not a good idea either. But as someone on the other end of the spectrum, I’m a bit concerned. I just don’t know if it’s the best message to send to children on a Saturday morning.

So once the next photo-shoot goes to shit (by Russell turning into a dragon… somehow), Zoe shows the photographer the footage, Tangier gets his comeuppance, and everything’s right with the world.

And while we’re on the subject of two-faced nut-jobs, you remember Mona Autumn, right?

She’s the crazy fashion magazine editor that took a shine to young Blythe. We met her last season. We also met her high-strung, nervous-wreck of an assistant, Phoebe. And I mentioned that we never got an explanation as to why Phoebe was such a nervous wreck, since Mona was much nicer than most people thought. One would think her assistant would be in on the act. But now, we finally get an explanation: Mona’s assistant is overworked as hell and needs a vacation! And to fill in for her, she needs to find someone Mona trusts.

Yes, Blythe. Apparently, Mona trusts Blythe. And she’s excited as hell to work for Mona Autumn! And this excitement turns to exhaustion once the day actually starts. And it gets worse once Mona starts in with the batshit-insane demands, like asking for tomorrow’s newspaper, today. Which given Blythe’s powers, might not be that difficult. 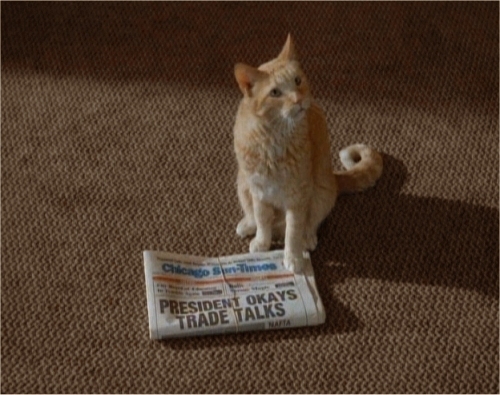 See, it’s funny because the paper on that show was delivered by a cat.

But thankfully, to help her deal with her new job, Blythe has a bit of advisory help from a different cat, Mona’s cat, Cairo.

She’s very helpful. But even this little kitty is powerless to prevent the horrifying disaster!

Yes, Mona has transformed into a tomato! You see, when she ordered lunch, Blythe forgot to tell them to hold the asparagus, and Mona’s allergic to asparagus. Well, in that case, she’s lucky she’s still breathing! Why did it only affect her face? Did she rub it in the salad!?

Well, it doesn’t matter, the important thing to remember is that she’s supposed to have an appointment that very moment with an eccentric and reclusive fashion designer named Clover Fields.

They can’t cancel the appointment, and Mona can’t risk having Clover see her like this. So Cairo and Blythe start working to occlude Mona’s face during the meeting. Which ends up being in very awkward form. 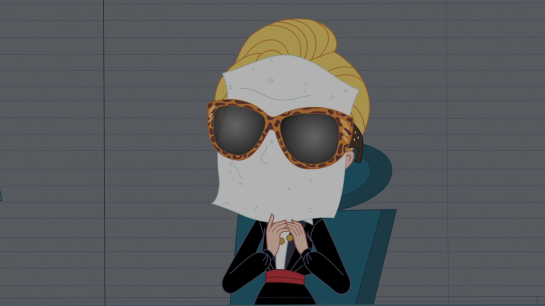 So, Blythe has to do most of the talking, since Mona’s voice was affected as well; though not to any significant degree, I might add. Actually, Mona could’ve spoken all she wanted, without issue. Don’t see why that was necessary.

But after all that crazy awkward work in obscuring Mona’s face, Clover becomes impressed with their eccentricities, and decides to première her new fashion line in their magazine. So victories all around! Mona’s allergies even clear up. Yeah, unless she injected an entire package of Benadryl into her veins, I’m not buying that. I know someone’s going to bring up EpiPens, but those just keep you from dying; and only long enough to get you to hospital! If you’re in anaphylaxis, a single injection of anything would fail in saving you. You get to a proper hospital, dammit!

But medical inaccuracies aside (though it is odd I’m complaining about that on a show about a girl who can understand animals), this was a really good episode. The plot built off earlier threads, which I always like; and continued the jerks-you-need-to-watch-out-for theme we’ve seen many times on this show. It had decent gags, and a happy ending. But it wasn’t perfect.

There was a problem with the cold open making the pets seem like whiny children, but that was probably intentional since they normally act like children.

Cairo’s reappearance was nice, and we even got some character development from her, which is new. Her attitude can best be described as being well aware that her owner is nuts, but not giving a shit. So she’s a typical cat. She also takes on a support role in this episode by advising Blythe throughout, and it makes me wish Phoebe had Blythe’s superpower as well so she’d get the same support. Or better yet: the support of another human. Because after all the stress Blythe is under in just one day, we get an idea of what Phoebe was going though, day after day, continually overwhelmed. It would drive anyone to the brink. So why doesn’t Mona hire a second assistant? I’m pretty sure there is more than enough work for two people, and someone as rich and successful as her should have a whole entourage. But no, instead she has just one personal assistant. It doesn’t really make sense! Then again, she’s also nuts.

I also have a feeling we’ll be seeing a bit more of Tangier in the future. We might have an interesting revenge story ahead of us. But Tangier isn’t really the type of enemy I think we should see again. He just doesn’t seem interesting enough to warrant it. He’s just a shit-eating prick who thought taking someone else down would somehow benefit him. So if they do bring him back, I hope they expand his character quite a bit, and do something about that bizarre accent.

We might see more of Clover Fields in the future, as well. But if so, I hope they make her more interesting than she was here. While soft-spoken and insecure is a fine character trait, it’s not enough to build a real character. She just came off as boring, and as little more than another hurdle for Blythe to cross. They should really build her more if they plan to use her as a recurring character.

So overall, it wasn’t great. But nonetheless, I really liked it. Though honestly, I think it does end on a sad note, when we know that the very next day Phoebe will have to return to this same torturous grind.

One response to “Malicious in Vogue: “Some Assistance Required” review”