There’s no such thing as psychics. If I really needed to tell you that, you’re an idiot.

I’m sorry, there’s no other way to put it. No one has psychic powers. No one! If they did, we’d have evidence of it.

If psychics did exist, and weren’t just liars and con artists, it would be extremely easy for them to prove it.

Take Harry Houdini for example, a magician and escape artist who spent his later years debunking psychics. Before he died, he gave his wife a secret password. And after he died, she went to dozens of psychics who supposedly contacted the late Mr. Houdini. None of them provided the password.

Then we have James Randi, who will give a million dollars to anyone that can prove something paranormal. So any kind of psychic abilities, or just being able to tell the difference between a glass of homeopathic remedy, and a glass of water.

No one has been able to get past the first round of testing.

Now, some may argue that the psychics don’t have to prove anything. And that is true. But why wouldn’t they? They don’t want the attention? Well considering several of them have million dollar book deals or national television contracts, I highly doubt that.

Besides, I have a very good reason why they should. Actually, I have several. Pick any major disaster in the past decade. How many lives could we have saved if we were warned in advance?

Now some would argue that they would have warned us, but we wouldn’t have believed them. All the more reason to prove you have powers to begin with, isn’t it? You prove you have powers, then, when you warn us a tsunami’s about to hit Japan, we actually take you seriously!

So either they’re lying, or they are willing to let people die. Neither of which is good!

This is why I think those who claim to be psychics are the worst people in the world. Either because they have powers and won’t use them to save lives, or don’t and are pulling shit like this:

That’s terrible. And it should anger everyone. Especially real psychics!

That’s right, it’s another Littlest Pet Shop! Are you surprised!?

We see her talking to Sweet Cheeks, her pet sugar glider. And given his expressions, it’s very obvious that she has no clue of what he’s saying!

But Twombly gets roped in immediately. Basically taking what she says as red, not questioning it at all.

Which is discouraging, but not surprising. Most people do that. They hear someone say they can talk to pets, and don’t bother to question it. Either because they don’t think to, or don’t know how to, or they really want it to be true and refuse to consider the idea that it’s not.

In Twombly’s case, it’s most likely the last one, since we see a fantasy sequence where Twombly imagines what the pets are thinking. And her fantasy turns Russel into a stoner, Pepper into a valley girl, Sunil into someone from Brooklyn, Minka becomes posh, Vinnie becomes German, and Penny… I don’t know what the fuck she’s doing.

So, the nut tries giving the pets a reading, and it’s the strangest thing in the world.

I’m flashing back to an episode of Stargate Atlantis, where McKay, Zelenka, and Ford are wandering one of the city’s hallways, and decide to play a bit of Prime/Not Prime. One person puts out a number, and the other guesses whether it’s prime, or not prime. And every time, Ford gets it wrong. That shouldn’t be possible. Even if he just guessed the answer, he’d have a 50/50 shot. By sheer probability, he should get close to half correct. But instead he gets every single one wrong. It’s almost amazing in its absurdity.

That is what this scene feels like. Just by sheer probability, this ‘psychic’ should get a few things close to right. Instead, everything she says isn’t just wrong, it’s the exact opposite of true.

She says that Vinnie’s a super genius, Russell likes things messy, Pepper has no sense of humor, Zoe hates being dressed up, Minka is very calm, Sunil is an adrenaline junkie, and Penny is a fighter. But in reality, for each of them, the exact opposite is true. It’s incredible!

But for some reason Twombly believes her, and suggests the nut set up shop in the pet store, to give readings to customers.

Blythe arrives later in the day, slightly bewildered. The pets explain to her what’s going on, and when she tells Twombly how bad a psychic the nut is, she can’t really explain how or why she knows that, since her powers are still a secret.

At this stage, I’d tell her. I’d tell Twombly the whole truth, that I have super powers, and that I can prove it.

Since Russell can read, all one would have to do is write something down, show it to Russell, and then Blythe could repeat it verbatim.

But she doesn’t do that, for whatever reason. I guess she doesn’t want the exposure. Which is something I can understand. She doesn’t need to go public to do good at this stage.

So, Blythe tries to confront our villain, who’s dismissive and rude, and doesn’t even care when Blythe asks to steal her pet.

So Blythe brings Sweet Cheeks out to the park, and it appears the little guy’s slightly agoraphobic. Turns out the nut never let him out of her purse! He’s even afraid of grass!!! 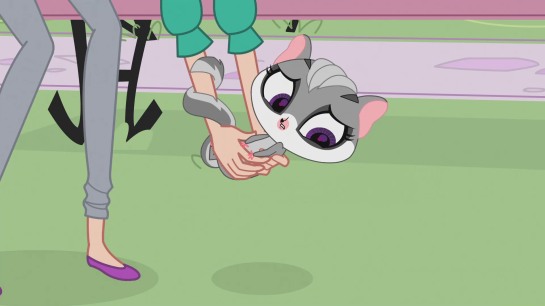 But after a few convincing words from Blythe, he dives in, and starts playing with the local wildlife, and flying around from tree to tree. A freedom he never knew before. It’s magical!

They arrive back at the pet shop, and our hero notices something: Truckloads of pet food have started to fill up the shop. All the same pet food, oddly.

But it’s not so odd when we notice Bitch Bitcherson is telling all her clients that their pets want a specific brand of pet food. Which is your first major clue that something’s fucked. I mean, beyond simple fraud. Especially considering no one says: “Wait, how does he even know what ‘Nummy Nuggets’ tastes like? I never bought it for him in the past. And how would he even know what it’s called!? Wait, can my cat read!? Oooo! Wanna try an experiment!?”

Anyway, it’s at that moment Blythe enacts her master plan. She dons a disguise and a southern accent, and gets the nut to do a reading on her own pet. She fails to even get the name right. Twombly overhears, and gets quite pissed.

Though her first clue should have been when people started returning the pet food recommended by the pet psychic. Apparently, it tastes terrible.

But why was she recommending it? Well, turns out our villain was actually a saleswoman for Nummy Nuggets. Why am I not surprised?

So, now that the fraud has been exposed. Nummy Nuggets takes back the food, gives a full refund, and fires the nut.

Well, not entirely, since the nut gets to keep Sweet Cheeks. You’d think the RSPCA would have been called.

I really liked this episode. It highlights the primary reason I love this show: it’s grounded in reality.

On the episode where someone claims to have superpowers, we don’t have a character learning that they should believe their friend when they say something batshit crazy. Instead, we have our hero trying to prove she’s full of shit!

The thing is, children’s media simply doesn’t have enough of this. You rarely see any form of skepticism play out on children’s television. They’re all about magic, or superpowers, or faerie dust.

For instance, I remember watching a Barbie DVD with one of my younger cousins back in the day. The story was decent enough, it was all about a fashion show. There was a villain there to create conflict and intrigue, and I did find it quite entertaining. Not entertaining enough to give it a recommendation, however. But all that being said, for some reason they included faeries and magic dust and I don’t know why! It wasn’t necessary, and let’s be honest, you wouldn’t think of faeries as typical of the Barbie franchise. Fashion shows, sure, but… faeries and magic? Why?

We need to see less of that, and I think it’s great that this show got away from that kinda stuff, and featured a ‘psychic’ who was a straight up fraudster. A kid’s show with a skeptical bent, we just don’t get enough of that.