I’m starting to get mixed feelings about Littlest Pet Shop. On one hand, we have recent episodes about skepticism, and social commentary. On the other, these same episodes can be summed up by saying: “People are shit.” Which isn’t a very positive message.

I kinda wish they didn’t need to give this message, but they kinda do. Kids grow up with this idea that everything in the world is sunshine and rainbows, and that just isn’t true. The world is very much imperfect, and there are a lot of assholes out there. But the good news is, they are in the minority. Most people are good people, with intelligence, and integrity. But it’s too easy to focus on the negative. On the con artists, the idiots, and the straight-up liars. But it’s important to know these people exist, so you can avoid them, and combat them.

Which is why I’m glad they recently covered another type of asshole on Littlest Pet Shop: The thieves and the fraudsters.

The episode opens with Blythe showing off her latest designs to the pets, and explaining her plans to show them to the coordinators of the local “Big, Feathered Parade.”

But when she arrives at the warehouse, she’s told she’s too young to participate. Which is just the most ridiculous fucking thing. I guess they don’t want five-year-olds wasting their time, but Blythe is… 16? … 15? I don’t know.

But as she’s leaving she meets Ramon. A famous designer, who’s heading up the design of the parade floats. Oh, and he’s fucking nuts!

But apparently, Blythe looks up to this guy, and is honoured when he offers to look at her designs. And he’s so impressed, he switches them out for his own.

Wait… that’s not on!

Yeah, he steals her designs. Which is fucking horseshit! Seriously, that pisses me the fuck off! Which makes him a pretty good villain, one must admit. An unapologetic thief we can have no sympathy for.

Meanwhile, the pets are looking over the parade website, when something catches Vinnie’s eye.

This is Bruce the Iguana, spokeslizard for the Iguana Legal Firm, which runs a cheesy, gimmicky ad starring the reptile. And it makes me think that no one takes that firm seriously, or it’s a parody of GEICO.

Anyway, Vinnie’s a big fan of his work, and gets even more excited when it turns out Bruce is the Grand Marshall of the parade.

Blythe returns and tells them what happened. Which upsets Zoe more than it upsets Blythe. Then they notice the designs that fall out of her portfolio are not her style.

So she decides to go back to the warehouse the next day, so she can return Ramon’s designs. And Vinnie begs her to let him tag along.

So, the next day, Blythe notices that the parade floats look familiar. 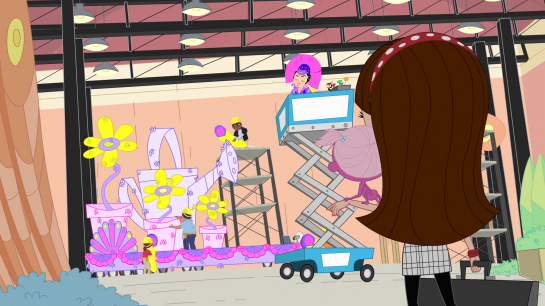 So, naturally, she confronts him on this, and, like I said, he’s unapologetic. “I’m not the thief! You’re the thief!” Then he laughs like a maniac while taking back his portfolio (but apparently giving it back during the scene transition- What the hell!?). And when Blythe tries to turn him in, the organizers dismiss her outright. Rude bastards. The appropriate response is: “This is a very serious allegation. Do you have any proof?” To which the answer would be: “No.” But that’s beside the point.

So, Blythe comes up with a new plan. Minka climbs up into the rafters, and meets up with Desi, Ramon’s Myna Bird. And we quickly learn that Desi’s a nervous wreck.

So once Blythe learns this, she decides to ask Ramon why his bird is so afraid of him. So, he responds by declaring he’ll have her thrown out, instead of asking, “How the hell do you knows that!? What, can you talk to animals or something!?”

You know, it seems the logic surrounding Blythe’s superpowers is breaking down slightly. And I haven’t gotten to the Bruce subplot yet.

Anyway, Desi exposits for a bit, giving us more reason to hate Ramon, while explaining exactly why he stole Blythe’s designs. He was experiencing a bit of designer’s block.

Then, the security guard arrives to kick Blythe out, and…

Okay, animators, design new characters. Because I’m pretty sure I’ve seen him in at least three other episodes.

Also, I’d like to point out that I’d feel pretty disrespected if someone referred to me by my job title, when I have a name.

Anyway, he arrives, and Blythe coaxes Desi into confronting his owner, since it appears he can speak human. Which came slightly out of left field.

But he chickens out and Blythe gets the boot. So, then, Ramon, in gloating victory, returns Blythe’s portfolio, and inadvertently gives her the evidence against him. Because despite the fact that he ripped out her sketches, he ended up leaving behind a few of Desi’s feathers within. How they got there, and how they ended up glued to the page, I’m not sure. And when she rushes to the organizers to turn him in, she notices some of the pages are stuck together, so she uses a bit of water to break down the glue. Then Ramon screams that water breaks down his ‘homemade secret solvent.’

This is the part of the episode I don’t get. Why were his feathers glued to a page in her book, and why was he using a solvent in the book? I assume they mean ‘glue,’ not ‘solvent.’ Because those are two very different things. One dissolves things, the other is glue.

Anyway, since Ramon just confessed to fraud, the parade organizers throw him out on the street. In fact, I wouldn’t be surprised if he’s permanently black-balled. But I am surprised they didn’t ask what else he might have stolen. Since this is unlikely the first time he did it.

So, Ramon’s out on his ass, the head organizer adopts Desi, and Blythe gets credit for the parade designs. A happy ending all around… or is it?

Because meanwhile, Vinnie and Zoe were having their own adventure in the warehouse, as they finally meet Bruce the Iguana. 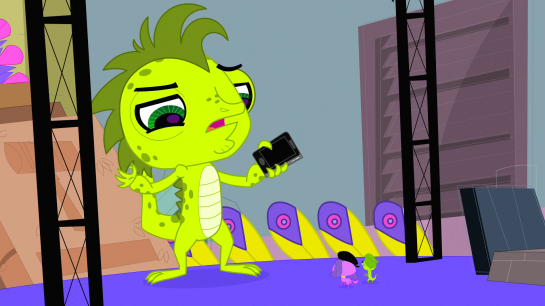 And also, he’s around eight times their height. That’s your second clue. Nonetheless, it appears Vinnie’s really thick, since he doesn’t clue in at all. Then again, Zoe doesn’t clue in either. So I guess she’s thick as well.

Anyway, Bruce says he wants the biggest water bottle one can find, and Vinnie decides to do his hero proud. This kicks off an epic search throughout the warehouse, for a giant bottle of water. Which he finds, and annexes from the top of a truck.

So he rolls it directly toward the mascot, and it passes right through him.

Yeah, turns out he’s a hologram. Played by a fat, angry, Aussie in a mo-cap suit.

Who then, suddenly, quits. So Blythe suggests giving the job to Vinnie. And somehow, that works. I don’t see how she got the organizers to agree to it, though. “Hey, why not give the job to a real lizard?” “Because it’s a lizard, and I doubt it could follow directions that well.”

But she manages to convince them, and it all goes off without a hitch. 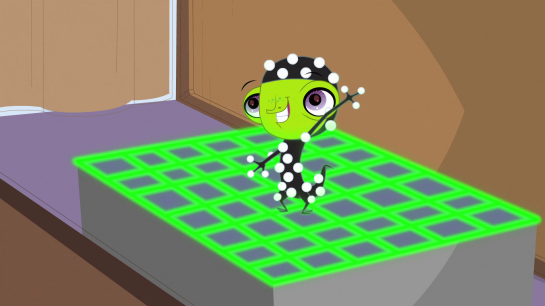 So, we get our happy ending, capping off a great episode.

I think the real message of this episode is simple: The celebrities we look up to may not be who we think they are. They could be unapologetic fraudsters, or completely fictitious. We don’t need others to be our heroes. We should be our own heroes. We should just look at ourselves, and be happy with what we are. Rather than unhappy we’re not someone else.

We should all strive to be better, but idolizing another, when you don’t know them from atom, is not the way to do it. And both Vinnie and Blythe learned that this episode, the hard way.

Hopefully, the rest of the world can learn the same thing, eventually. But as long as Survivor stays on the air, I doubt that’ll happen.