I would love to meet an alien. Who wouldn’t?

To start, I think it would be nice to finally know that we’re not alone in the universe; It’d make existence seem less lonely. We’d be exposed to a brand new culture, one we couldn’t have even fathomed before, and we’d gain new ideas about biology and evolution. We’d have new motivation to explore the stars ourselves, and they could answer the mysteries of the universe we still haven’t solved. Like how to travel faster than light, what dark matter is, and why American Idol is still on the air.

I don’t know anyone who wouldn’t be excited to meet an alien. Well, racists probably wouldn’t be too happy. They have a problem with members of the same species who just happen to have higher melanin content. Imagine how they would react to a six-armed tentacle beast, even if it just wanted to be your friend and help you cure cancer.

But for the most part, I think we’d be happy to meet alien life. Even if we never met; Even if we just knew they existed because they sent us a radio message. I think that alone would change everything, and maybe make us appreciate our own existence even more.

So all that being said, you’ll understand where I’m coming from when I say, if you think you’ve been abducted by aliens, you’re wrong.

Believe me, I wish you weren’t! Because that would prove aliens existed. But if you have no evidence, your claim has no weight. So here’s what I suggest: Next time you get taken to the flying saucer, when the aliens are looking the other way, reach over and grab something off the desk. Anything! Because no matter what it is, it’ll be a miracle of technology to us on Earth.

The same goes with sightings of flying saucers, and the various alien conspiracies that have cropped up over the years. Show me the proof, and I’ll believe you. Primarily because I want to believe you. But if you can’t prove it, I won’t.

I’m not saying you’re lying. But it’s pretty easy to confuse one thing for another. To see something in the sky you don’t immediately recognize, and assume it’s something unusual. But that doesn’t mean it is.

And that’s an important thing to remember: Just because something seems paranormal, doesn’t mean it is. And that message was sent quite clearly during a recent episode of Littlest Pet Shop… which I totally saw coming.

Our story opens during a normal day in Downtown City. The pets have just returned from a visit to the vet, and are quite irritated about it. 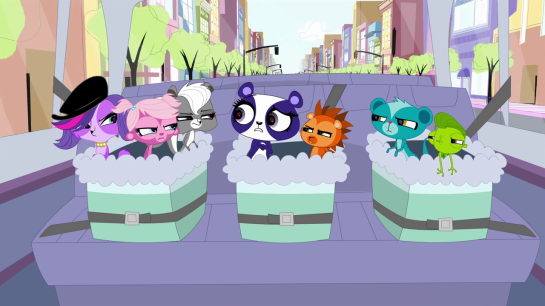 But mainly, they’re irritated at Penny Ling for eating all their cookies.

So, they start bickering quite a bit. Until Vinnie suddenly spots something out the window.

Actually, why not assume they’re tourists? They’re just on vacation, checking out the sights!

But no, they all assume the worst. Well, everyone except Minka, who assures the others that they have nothing to worry about, since she has experience in dealing with aliens from that time she visited Mars. Yeah, no one ever told her that they faked it.

So once they return to the pet shop, they decide to prepare. Taking logical steps to defend themselves from the alien threat. 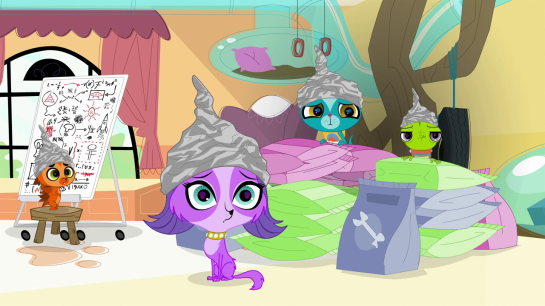 Okay, that was a lie. They all take very insane steps. But the most interesting approach is Russell’s: He’s trying to develop a universal language.

I, myself, have given this a lot of thought, and I don’t think you could actually do it. You could create a new language that was an amalgam of multiple alien languages, like an interstellar Esperanto. But everyone would have to learn it, they wouldn’t automatically know it. The closest you could get to some type of universal language is a pictographic system, where each word is an image, or possibly a video. But that wouldn’t be very efficient. However it could be used as the basis for developing an automated translator.

Sorry, you get me started on science fiction, I can get a little nuts. Don’t ever bring up phasers.

But back to the story at hand. Once Blythe arrives, and notices the tinfoil hats, she immediately gets curious. So they explain exactly what happened, and she laughs in their faces.

I had the same feeling.

But since they’re so insistent they saw an alien craft, she decides to call an expert on skies, and ask for his professional opinion. 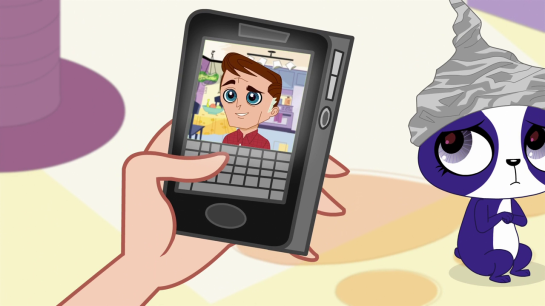 Perfect! I mean- Wait… Wasn’t this the same guy who believed in Bigfoot?

Oh yes! Turns out Roger is actually not sure if the things he saw in the sky were natural or not. And here’s a fun fact: The number of reported UFO sightings among commercial and military pilots are almost zero. Why? Because they spend so much time up there, and are so well-trained, they can easily identify what is normal, and what isn’t. And since flying saucers don’t exist, they never see any! They can tell the difference between an alien spacecraft, and Venus.

But yeah, he doesn’t give a definite answer. So Blythe decides to go looking for one. And the best way to do that is to find the saucer.

So they all hop onto her scooter, and along their journey, begin to hallucinate various alien craft.

Turns out it was just a water tower, which takes the air out of their initial alien claim, doesn’t it?

Apparently, this happens a lot. For instance, if you hear a place is haunted, you’re much more likely to ‘see’ ghosts there. There are no ghosts, you’re just hallucinating. And I’m certain the same applies to aliens as well. During the infamous War of the Worlds broadcast, where people assumed it was a real news broadcast, some claimed to hear the sounds of alien ships, even though there were none. It just goes to show how easily our minds can fool us.

So eventually, they arrive at ground zero for the invasion fleet.

Huh, they rebuilt pretty damn fast, didn’t they? I knew that episode was pointless.

But where’s the alien spacecraft? Well thankfully, the Biskit twats teleport in to explain between insults. Apparently, the flying saucer was just an inflatable they put atop the store, that was since taken down.

Well, that explains everything! Well, except the reason why they even had the thing to begin with.

You see, while all that’s going on, Fisher Biskit was in the middle of an advertising blitz for Largest Ever Pet Shop. And that formed the entire B-plot. Because as he’s doing this, Twombly’s responding in kind. She even hires some outside help in the form of someone we haven’t seen in a long while. 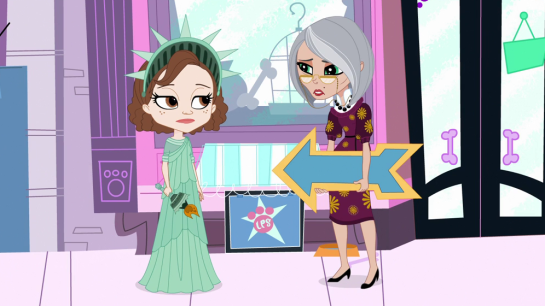 Hey! It’s Maddison, from last season’s première! Where’s she been? Anyway, she’s hired as a sign spinner, which is an advertising style I’ve seen before. And I have no idea how effective it’s supposed to be, because it didn’t make me want to buy anything, it just confused the hell out of me.

Then they try giving out free pet food samples. Again, not sure how that was supposed to work. Because unless the owners have Blythe-powers they can’t just ask their pet if the food’s any good.

But what is Largest Ever Pet Shop doing? Well, radio ads; TV ads, starring the twits, who suck at advertising; and this: 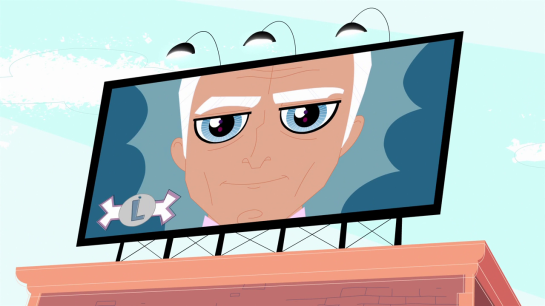 THE FUCK!? How is that supposed to work!? You think if they’re frightened enough, they’ll buy more shit!?

So as a final salvo, Twombly purchases a giant inflatable of a flying saucer… And it was still loaded with advertising for Largest Ever Pet Shop. 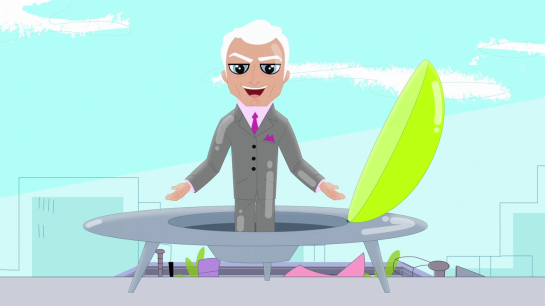 So that backfired. Didn’t she examine the thing first? Before installing it?

So that was the episode, and it was a blast!

We had the pets having a natural overreaction, and each having their own reasons for doing so. That is, everyone but Minka, who thought she met aliens before. And ultimately, Blythe discovers there were no aliens, which is an ending I like. Too many times we’ve seen these shows go the non-skeptical route and say that the bunk is real. But they didn’t do that this time and I’m–

Still, great episode, with a solid B-plot to boot. It relied primarily on absurdist humour, but I still enjoyed it. Though who would buy from a store that did little except patronize, insult and scare their customer-base is beyond me. I guess this is why Littlest Pet Shop is the more successful store, isn’t it?

One response to “An Alien Confusion: “War of the Weirds” review”