I am not thrilled, or amused in the slightest.

I think the only word I could use to describe my current outlook is: disappointment.

But I’m getting ahead of myself. Today was the day the bronies have been waiting for. For something I already commented on a few weeks ago. Today was the third season finale of My Little Pony: Friendship is Magic, where Twilight Sparkle evolves into Princess Twilight Sparkle, after her friends use the Harmony Stone on her.

Honestly, I was kinda looking forward to this, because given the summary we were treated to, it seemed interesting. The whole ‘switching cutie mark’ thing felt like it would go in an interesting direction. And… well… It did, but in a way that made me very angry.

This is gonna take a while to explain. END_OF_DOCUMENT_TOKEN_TO_BE_REPLACED

One of the things I love about My Little Pony is the world building. There’s a lot to the land of Equestria. The locations, the mythology, and the political systems feel quite fleshed out and developed. So much so that Hasbro actually released a full map of Equestria. A map that’s full of inconsistencies. 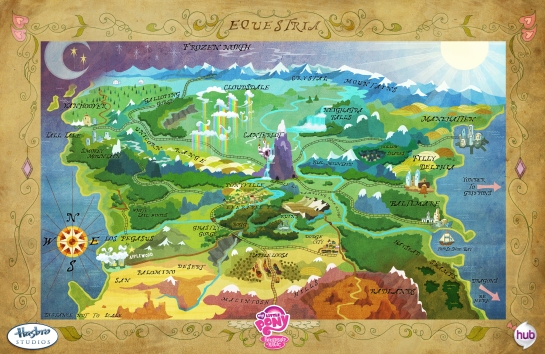 I bring this up because the fact that it can be full of inconsistencies just proves my point. Equestria has been so fleshed out that we all have a pretty common and complete vision of how the land of Equestria is structured, headcanon notwithstanding. And almost every episode has only made it fuller.

…at least, it did in the first two seasons.

For season three, the world building simply hasn’t been as interesting or well done. It’s still there, but it feels half-assed. For starters, there was The Crystal Empire, which was probably the most boring episode, featuring the most boring villain in the entire series: Sombra. It just felt like it’s been done before, especially the ending, where the big challenge for Twilight was: walk down a bunch of stairs, then walk up even more stairs. That’s right, when I think pulse-pumping action, I think stairs. No deceptive puzzles, no complex moral tests, just stairs.

For the rest of the series, we got no major extension to the land of Equestria. Or at least none that were interesting.

Okay, that’s not entirely true. We learned that Princess Luna is Dom Cobb, and that there’s a nation called Saddle Arabia, which is cool, I guess.

But at least none of the world building has been bad this season, just boring. If nothing else, boring is better than bad or contradictory or completely ridiculous, which they’ve thankfully avoided this season… UNTIL NOW!!! END_OF_DOCUMENT_TOKEN_TO_BE_REPLACED

I am a skeptic in every sense of the word. Not just in the traditional sense, scientific skepticism, but in the sense of simply not trusting people at their word, no matter what the context.

Of course that kind of worldview is not easy to maintain. After all, it takes a lot of work to fact check every word said by every politician and public figure. So often, you might not have a choice. You might not have time to run detailed research into, for example, the Bengazi incident, when several american diplomats were killed. You might not have time to look into the death of Aaron Swartz, and find out if the Justice Department pushed him to suicide. So it’s easier to take people at their word.

But sometimes, finding the truth is not that hard. All it requires is two minutes of thinking to get to something close to the truth.

For instance, take the statements made by Todd “Legitimate Rape” Akin, just last year. Anyone with half a brain knows what he was saying makes absolutely no sense. How could the human body identify the type of situation it finds itself in? And even if it could, why would the human race evolve a method to stop the passing on of our genes? It would be a good thing for the woman, but not humanity at large, and that’s what evolution prefers to benefit.

Then we have another issue: Women in the military. Specifically, front-line combat positions. The counter argument to this is that it damages unit cohesion, or that woman cannot possibly carry their comrades off the battlefield like men can. Think about this for ten seconds and you’ll see how ridiculous this is. First of all, damages unit cohesion? That men and women cannot get along and be just friends? At some point they’re going to have sex? That’s asinine. I’ll tell you this much, some of my best friends have vaginas, and I never banged any of them. It never seemed needed. And as for physical strength, I can tell you from personal experience that’s bullshit. My prom date back in high school was a giant. She would have no problem carrying her comrades off the battlefield, let me tell you.

See, with a bit of thinking, you can arrive at the truth pretty quickly. And it’s this technique that got me to an unsettling realization when the latest news on My Little Pony dropped earlier this week. 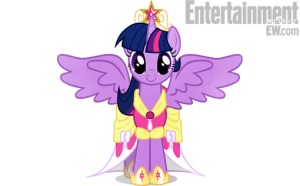 You see, it appears that in this season’s final episode Twilight Sparkle will grow wings get coronated as a Princess. And it didn’t take me long to realize that this could be very… very… very racist. END_OF_DOCUMENT_TOKEN_TO_BE_REPLACED

I think Spike may be my favourite character on My Little Pony: Friendship is Magic.

Recent episodes aside, he’s shown himself to be reliable and trustworthy. If a little oblivious. He cares for those around him, and is always willing to help.

But of course he’s still a dragon, which comes with its own problems. Dragon instincts don’t fly well with the society in which Spike currently resides. Immense greed, an overzealous rigidity to a moral code, and a single-minded hunger for gems can cause quite a bit of conflict when surrounded by those who don’t have the same mentality.

What is a dragon to do?

Well, you try to get by the best you can. But obviously it’s not easy to go against your instincts and basic nature… though it would be nice if he actually tried. I bring this up because on this week’s episode, he doesn’t… at all. END_OF_DOCUMENT_TOKEN_TO_BE_REPLACED

Ideally, the primary purpose of prison is to rehabilitate and reform criminals so they can one day reenter society. Or at least, that’s the idea. Unfortunately, it doesn’t always work out. Often, criminals are released, only to re-offend, somewhere down the line. Even if they seem to have turned over a new leaf.

It’s a sad fact of the criminal justice system. That sometimes, despite our best efforts, some people just can’t be rehabilitated. But that doesn’t mean we shouldn’t try. There’s always a chance that even the most hardened criminals can learn how to behave in the outside world. They can learn that it’s wrong to rob, rape and kill. And this week on My Little Pony, Princess Celestia relies on that idea when she releases Discord from his stone prison. END_OF_DOCUMENT_TOKEN_TO_BE_REPLACED

If you have a job, I must issue you an applause. It must be nice to work, have something to do, and not worry about money too much. I used to have a job, however briefly. Those six weeks I’ve spent working retail I certainly enjoyed, and I wish I could go back, but that’s not happening. I’ve actually spent most of my adult life (since graduating college) unemployed. It’s depressing.

I’d understand if no one wants to give me a break and a chance to prove myself. But I already proved myself, and I think I did a good job…that is, if you ignore my last day, which I shall. So why can’t I get a job? I have the skills, I know modern point-of-sale systems, I know how to sell. Just recently I was at the local pharmacy, and the cashier didn’t know how to use a gift card. Apparently it was her second day, and her trainer was occupied. So, I walked her through it. I knew exactly what to do, just by looking at the screen.

I never lost these skills, and I never will. I can’t! In spite of the fact that I don’t apply them in my daily life today.

Which is why I find the latest episode of My Little Pony so odd, as young Spike forgets every skill he’s ever had, the very moment he starts to work for Applejack. END_OF_DOCUMENT_TOKEN_TO_BE_REPLACED

Well, it’s that time of year again. The time where we drop what we’re doing and cross the country (or maybe just the city), to join our friends and family for some joyous holiday celebrations.

I guess most people enjoy spending time with family…I don’t. They’re annoying, insipid, and any time I spend with them, my outlook can be best described as: begrudged. I’d rather spend time with people I actually care about: My friends, or the internet.

For the most part, any special occasion or event is just an excuse to spend time with the people you love: friends and/or family. The events themselves don’t matter.

No one really cares about Christmas…not really. They care about giving/receiving gifts; and spending time with loved ones, talking, catching up, and maybe bonding through a few casual games.

Once you get a bunch of people together in the same room, they tend to make their own fun. You don’t need to plan anything in order for people to have a good time. Bring some food, drinks, maybe some music, and you’re set.

Unfortunately, not everyone realizes this. Many parent try to schedule their kids lives down to the minute. Others plan social events with so much detail, that no one gets any time to sit down, relax and do their own thing.

Which leads me perfectly into this week’s episode of My Little Pony: Friendship is Magic, as Applejack organizes this year’s Apple Family Reunion and, as expected, completely messes it up. END_OF_DOCUMENT_TOKEN_TO_BE_REPLACED

In order to be successful in life, one must first understand what success means to them.

For me, this is easy: I want to become a published novelist. For others it might involve making a shitload of money, or winning some award. But there’s always something they need to aspire to.

Once that’s done, you must then understand how far you’re willing to go.

We all have our limits, things we simply won’t do no matter what the consequences, or what we may get out of it.

Okay, that’s not entirely true. Not everyone has those boundaries. In fact, some don’t have any boundaries. These people are known as psychopaths, and on this week’s episode of My Little Pony, we learn they also exist in Equestria. END_OF_DOCUMENT_TOKEN_TO_BE_REPLACED