Okay, I know we’ve been down this road before.

The thing about love is that it can make you do stupid things. I know, I was a teenager for about six years, what do you think happened?

And these stupid things can run the gamut, from simply not learning to let go, to getting overly-excited and scaring the other off, or not understanding that they’re just not into you until it’s way too late for your heart to get out unscathed.

But that’s just the tip of the iceberg, really. There are so many stupid things you can do because of love. And when it comes to love and stupidity, look no further than Ponyville’s resident romantic. 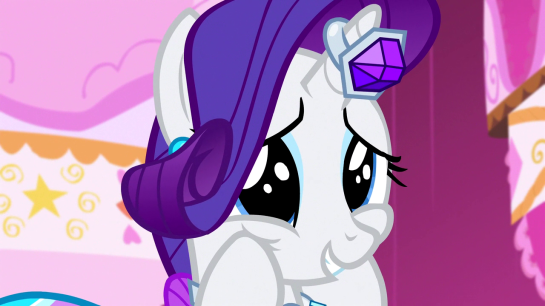 Rarity! A mare with fine tastes and a big heart… ostensibly. And on this episode, her big heart gets inadvertantly crushed, and she does not handle it well.

It all starts with the announcement of who is going to organize the Ponyville Day celebrations. And for some reason, everyone in town showed up. 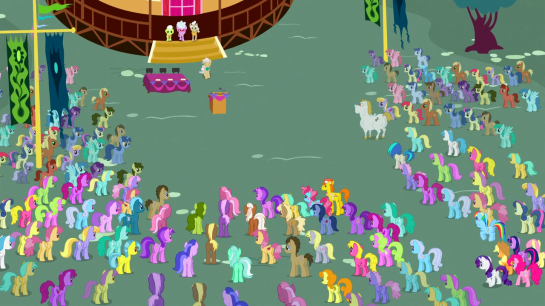 I just don’t understand this. Why are they all excited to find out who’s organizing the thing? I understand showing up for the actual event, but they’re just announcing who’s running it. I get that it’s a big deal, I just don’t see why anyone, other than those who are in the running, would care.

And already we’re off to a flying start, since it appears as if they didn’t bother making their decision until the last minute. Since we see the mayor, all ready to declare who’s in charge, then turning to the selection committee, who begin whispering to each other.

And of course, they choose a member of the main cast: Rarity!

Wohoo! Everyone’s so excited! For pony’s sake… she just got hired for a job, that’s all! Relax!

Anyway, they obviously picked the right mare, since she is already prepared with several ideas. All based around a high-society theme.

And now that it’s all planned out, she has three days to throw it all together.

Regardless, the others offer to help bring it all together. Which she is grateful for. Now she can focus on the most important task of all: Impressing Trenderhoof!

Well apparently, he’s a travel writer that’s going to be visiting Ponyville for the celebrations. And apparently, Rarity has a crush on him. 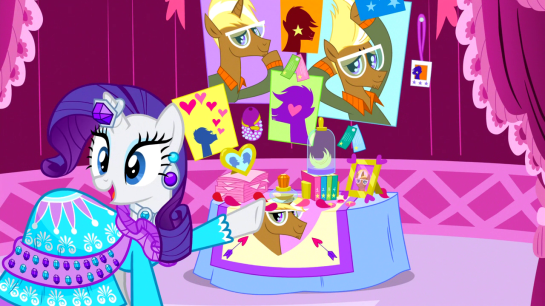 She even built a shrine, and got a lock of his mane, apparently! That’s stalker-level behaviour!

The next day (I assume) Twilight and Rarity go to the train station to greet Trenderhoof. 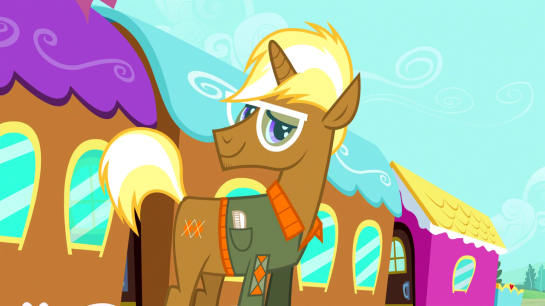 And of course, Rarity greets him in the most elegant way possible. 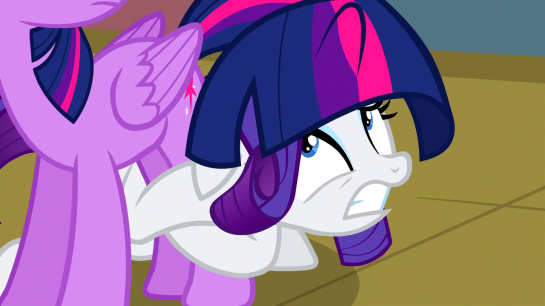 Or not. Obviously nerves start to get the best of her, so Twilight has to physically (or magically) push her toward him. At which point she’s forced to introduce herself while giggling like a schoolgirl.

The two of them go on a tour of the town, and end up at Sweet Apple Acres, where Trenderhoof is in awe over the rustic charm of the place.

Let’s talk about this stallion for a second. Apparently, he was originally supposed to be based on Anthony Bourdain. I don’t see it, but I do find that interesting. Especially considering Bourdain is apparently a fan of the show. Primarily because his daughter is too. Which isn’t that uncommon.

So, because of that, I wonder if they tried to get him to actually voice the part. That would’ve been interesting. Then again, it’s possible he’d suck at it, since he’s not an actor, he’s a chef.

But like I said, I don’t see it. Anthony Bourdain is a travelling chef. This guy is more of a travelling fashion victim, and tool.

I kid! I actually kinda like Trenderhoof, dispute what happens later. For you see, while at the farm, he ends up setting his sights on Applejack. 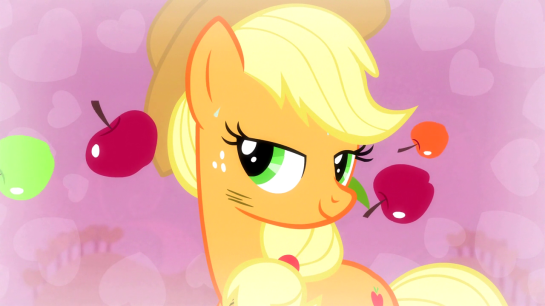 … And immediately falls in love. I can see that. Applejack does have a charm about her, she has a strong work ethic, a bullet-proof integrity, and a loving, caring attitude.

And of course, Rarity takes this as well can be expected. 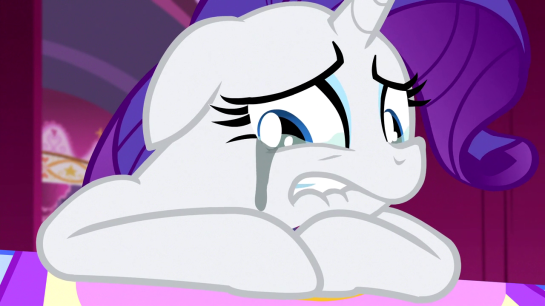 And Spike tries to comfort her, but it doesn’t work, since how could he possibly understand what it’s like to fall in love with somepony that’s fallen for somepony else!? 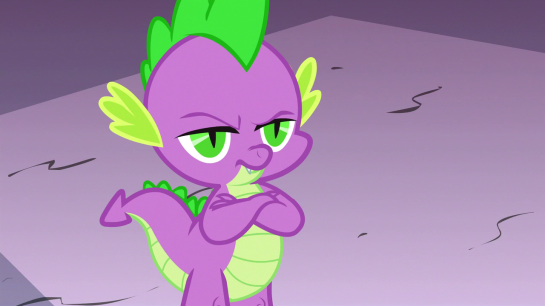 Huh, that’s odd. I thought she knew Spike had a crush on her, she just didn’t care. But she didn’t know at all!? I’m confused.

Later, Trenderhoof tries to woo Applejack by fawning over her like a goddamn creep. 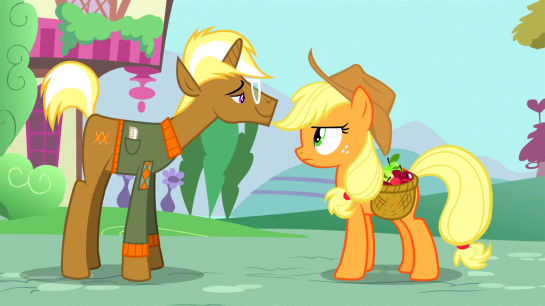 For those of you who don’t know, that’s her get-the-fuck-away face. 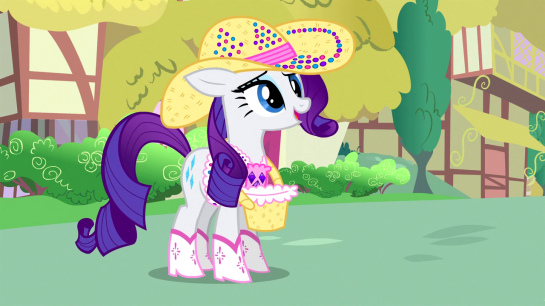 Apparantly, she plans to act more like Applejack, to try and win Trenderhoof’s affections. It doesn’t work. But naturally, she doesn’t give up, and decides to try her hoof at plowing fields. 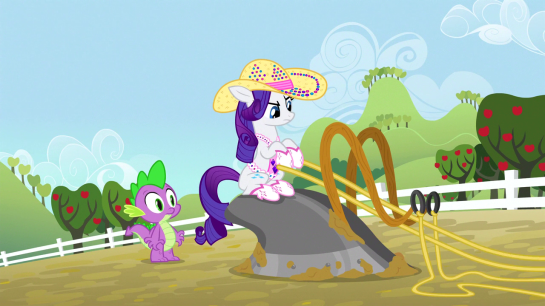 You know what, Rarity? Never change.

Meanwhile, Applejack is still creeped out by Trenderhoof, but I’m not sure why, exactly. Is it because he’s a unicorn, you racist? He seems charming enough, if a bit obsessive. Actually, that’s probably it. Obsession can be a real turn-off.

But Rarity’s still not giving up, and her latest strategy is to develop a new theme for the festival. 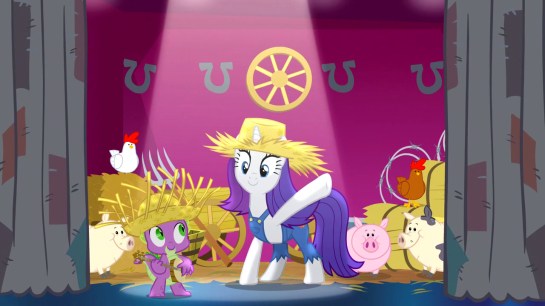 Yes, turns out Rarity wants her theme to now be about country and farm life. She removes her makeup (but keeps the fake eyelashes for some reason), starts wearing overalls, and lets her hair go to shit, while speaking in the worst southern accent I’ve heard in a long time.

So Applejack tries to talk some sense into her, because she’s still sane. It doesn’t work. Instead, Rarity takes off to work on the new fashion show, by teaching Apple Bloom, of all ponies, how to dress like a country filly. 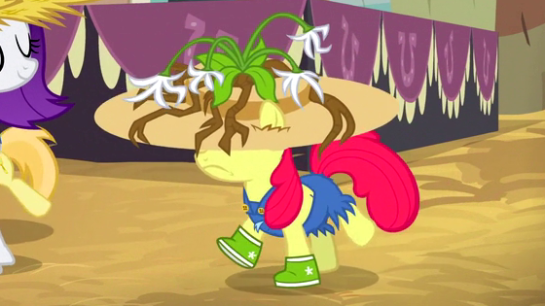 You know, I’m pretty sure she’s just taking the piss.

And this is proven when Applejack… oh sorry, Applejewel… arrives. 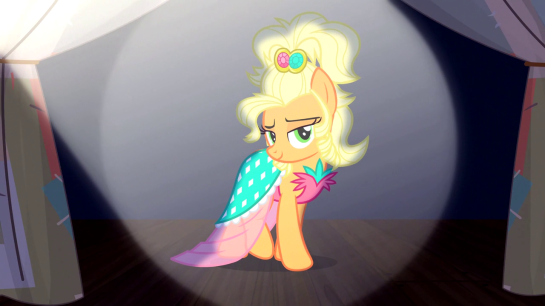 This sequence has to be the highlight of the episode for me! A solid minute of nothing but Rarity and Applejack mocking one another. And it ends on the greatest line possible: “I LOVE BEING COVERED IN MUUUUUD!” 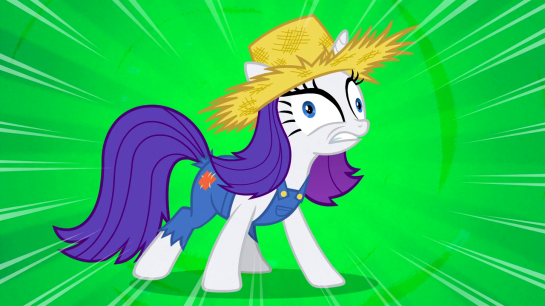 I don’t know why that makes me laugh! It just does!

But suddenly, Rarity comes to her senses, the moment a drop of mud ends up on Applejack’s dress. She then realizes just how stupid she was being. Trying to change herself just to impress a member of the opposite gender. It was so stupid. Why’d she do it? Why would anyone do it!? 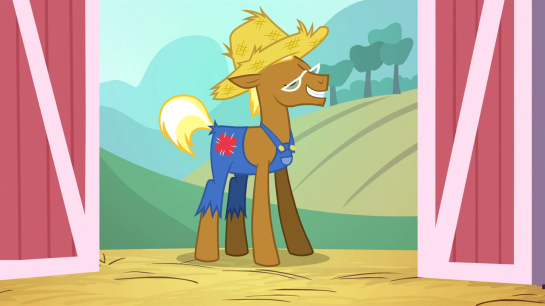 Hey, remember when I said Trenderhoof was a tool? I guess this is why he’s not played by actual Anthony Bourdain.

Yes, apparently Trenderhoof wants to abandon his writing job, and live on a farm… with Applejack obviously, but he doesn’t say that. Nonetheless, she turns him down, by saying: “Look, you’re a fine pony but, uh… well… I’m a…”

Now, for some reason, I’m guessing she was going to say ‘lesbian.’ But they had to cut her off, so as not to anger the moronic morons who are morons, like last time. It would certainly explain why she was so cold to him over the course of the episode. She barely even acknowledged his advances, it’s perplexing. And Applejack being gay would make much more sense than my other theory: That five out of every six fillies are spayed before puberty.

But that being said, I hope it’s not the case. I hope she’s not gay. Not because I have a problem with gay characters, I don’t. I just don’t think, if there is a gay character, it should be Applejack, or Rainbow Dash for that matter. Why? Because these two are two of the least feminine characters in the main cast. So for either them to come out as gay would just be perpetuating stereotypes. You know the old stereotype: ‘Oh, she’s not a girly girl, she must be gay.’ Not only that, it would be boring as hell!

If anyone should be gay, I’d like it to be Pinkie Pie. I think that’d be an interesting little plot thread. A new mare comes to town, Pinkie finds herself instantly smitten, and is shattered when she finds the new girl is straight. Meanwhile Twilight, who never met a gay pony in her life, doesn’t know how to calculate this. And is even more shocked that she didn’t pick up on it! And during the entire episode, she just keep acting weird around Pinkie, because she doesn’t realize that ‘gay’ is not synonym for ‘eldritch horror.’

And the episode ends with Rarity explaining to Trenderhoof the exact same thing she just learned. And it’s something I’ve talked about before. When it comes to wooing a perspective mate, don’t change yourself to please them. Just be yourself, and if they don’t like you, you’re honestly better off.

Then the Ponyville Day celebrations begin, and they’re back to the original high-society theme. And it’s a hit! Everypony loves it. No one can complain. Not even me, since this episode was fantastic!

It was funny, exciting, and everyone turned in a great performance; particularly Rarity, as I’ve actually learned to respect her a bit more after this. Sure she did something stupid, but it was for love, and you can’t blame someone for doing something stupid while they’re in love! We also have her taken down a peg, but she rebounds, and ends up learning from the experience. And she learns the right thing! Plus, it was a romance episode, which this show has been quite anemic on. Like I said, it’s sorta like they’re actively avoiding it for some reason. And I just don’t understand it. I really want to see more story lines like this. I really want to see our heroes fall in love. I want to see Fluttershy fall in love. I think that would be interesting! She’s such a shy character, you could see the others try to get her to act on her feelings, while she tries to work up the gumption to face her fears. Perhaps even an episode where Applejack has to choose between her farm work and her family, and Mr. Right… or Miss Right, if that’s where they really want to go.