Owning a pet is a big responsibility, you have to feed it; give it water; and clean up after it when it pisses, shits, and vomits on your rug, or laundry pile. So why have one? Because they are also a great source of joy. Short of having a kid, you can’t get that kind of love elsewhere, and having a friend who is okay with listening to the bullshit you rant about can be really cathartic. Even though they don’t understand a word you say. Also…kitty’s fur is so soft. Purrr.

Anyway, this week on My Little Pony, Rainbow learns the value of having a pet, the best friend you will ever have, by getting one.

The episode opens with a dream sequence which doesn’t actually have anything to do with the plot, and it feels superfluous. At first I thought there was a purpose to it, because it basically involves Rainbow having fun, racing against Owlowiscious, which made me think it was going to make her realize how much fun it is to have a pet. Then his head was replaced with Winona’s and I thought, “Well, so much for that.”

Rainbow then wakes up and notices her five best friends have all brought their pets to the park, like they do every week…which is news to Rainbow. The others never bothered to invite her because she didn’t have a pet, so there wasn’t much of a point. Then again, it didn’t appear as if the pets were playing, or even interacting with, anyone other than their owners anyway, so I don’t know why they go out together in the first place. Then again, they might build up to that.

Rainbow tries to go back to sleep, then, in frustration, declares that she would like to have a pet, she just doesn’t have one now. Then Fluttershy goes nuts.

Did I ever mention that Fluttershy is my favourite character? This is primarily because I think she’s schizophrenic. Normally calm and timid, sometimes her personality does a complete 180. Like in Dragonshy, The Best Night Ever, and Lesson Zero.

That video is gold by the way. Anyway, Fluttershy sorta responds in a bit of an overly excited way, and ends up dragging Rainbow to her house, where she has all sorts of pets available.

I said last week that I was hoping for a new song, after all, we were kinda due. It’s a duet between Rainbow and Fluttershy, musical-theatre-style. I’ve never been a big fan of musical theatre, and I’m still not. So I’m not a big fan of this song. Certainly not the best of the series. As for the animation, there are a few head on shots where their mouths look weird, like internet chat emoticons, and that sorta bugged me.

I’d also like to point out, near the end of the song, everyone’s favourite meme, Derpy, pops her head out of Fluttershy’s chicken coop for no reason. She has no purpose, and in reality, nopony should be there. I think she’s only there to please the fans, which is why I hate fans. This is probably also why Fluttershy said “yay?” near the end of the episode for no apparent reason. It’s just blatant fan service, and I don’t approve of any of that.

So the song ends with Dash having too many options for a pet, and she declares the only solution is a contest. Whoever wins will earn the honour of being her pet. There are around a dozen contenders, consisting of a few birds and insects. Now, I know some keep insects as pets, but I figured they’d be too easy to lose, and I doubt you could bring them on a playdate with a cat, dog, and owl in the area, without them getting eaten.

Just as the competition is about to start, Fluttershy convinces Rainbow to let a tortoise compete. Rainbow is initially against it, but eventually decides to give the little guy a chance. Every round he fails; the race; acrobatics competition; the steal-from-Opal challenge; the beauty pageant; the interview; and finally, the talent portion. But he does try his best, hands down, and he never quits. He even tries to compete in the finals, which technically, he didn’t qualify for.

So the race begins and the tortoise ends up falling behind everyone else. I, personally, was rooting for the bat. He looks cool, and I like bats, and cats, and I’d love to own a Zat, and I have a sweet hat. Anyway, as Rainbow is leading the pack she accidentally causes an avalanche right on top of her. She survives, but ends up pinned under a rock, as all her contenders for pet, pass her. Fucking assholes.

So, Tank the tortoise becomes Rainbow’s new pet. I saw this coming when he was practically begging for the position in the big musical number. For instance, Rainbow says she wants something “cooler” and Tank ducks his head inside his shell, and comes out wearing sunglasses. Yeah, he’s cool…seriously, he is. 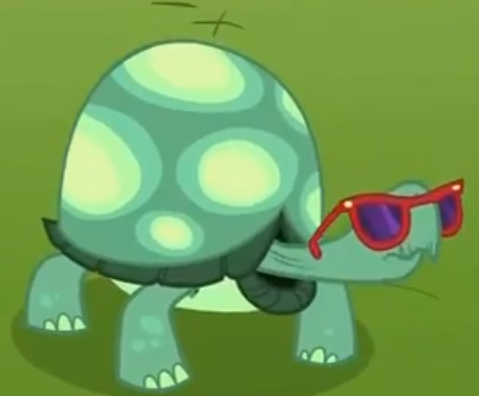 Finally, at the end of the episode, Fluttershy pointed out that having a tortoise as a pet will likely keep her on the ground. So they strap a propeller to the guy’s back. HE CAN FLY!

I really like this guy, can’t wait to see more of him.

Not really the best episode, but a good one. The competition get’s a bit repetitive, particularly with regards to dialogue, which could be a joke, but it goes well over the rule of threes. Overall, Luna Eclipsed is still my favourite this season.

This is a bit short so next I want to talk about something else: My Little Pony toys.

The line of pony toys is extensive, but really, there is only one line worth paying attention to: The Playful Ponies. The main cast is all represented, and they all look good. Well, for the most part. The Twilight toy looks like a bitch, and the Dash toy looks like she always dresses in style. *shutter* That still creeps me out. Anyway, give her a hat and scarf and she’s good to go. But you can style the hair, and cut it so it looks exactly the way you want; or you can buy plastic hair that fits on the dolls. So, it’s all good. More of the cast is represented in the Playful Ponies line then any other. But there is one problem: the Luna toy.

See, it’s only available bundled with a Celestia toy, which is pink, and that’s also a problem, but not one I want to get into right now. The problem isn’t that it’s a bundle; the problem is, it’s only available at one store: Target. So how’s that a problem? There are no Targets in Canada, and I live in Canada. But that’s not all, I know someone who is going on a trip to the US very soon, and I was going to ask her to stop by a Target and pick one up for me. So I go online and try to find what stores have Luna in stock, and I find only one, that would have been well out of her way, nearly 10 miles out-of-town. I can’t ask her to do that! Meanwhile there are eight Targets that are closer, but do not stock the toy.

So here’s my problem: Why exactly did Target get this exclusivity deal? Especially considering they don’t seem to care about it enough to keep any more than a few of their stores stocked with this toy. I understand why Target wanted the deal, if someone wants this toy, they need to go to Target. Wal-mart can’t help them, so they are forced to spend their money at Target. But what I don’t understand is how Hasbro benefits. Was Target willing to pay a higher wholesale price for the exclusivity? Maybe they covered some of the initial manufacturing costs! If so, one would think they would want to sell more by stocking more, to make it worth the effort of getting the deal. Instead it’s a waste.

One last thing, we recently got a summary for episode 11, and according to the summary, we will get to learn the story of Equestria’s founding. I have a feeling it will have nothing to do with Discord. But the reason I wanted to talk about it is because I have a feeling it will contradict 99 percent of the fan fiction out there. So I want to ease the fears of the fans. Whatever the story is, it could easily be a cover story for the truth, which is much too horrible to reveal. I know I was going to mention something about it in My Little Destiny. But I’m sure whatever the public story is, I’ll be able to skate around it and still have it fit the story I have planned. I’m not worried. Though I am glad the truth will finally be revealed, and I think it’ll have little or nothing to do with Luna and Celestia’s god-status.