Well, Happy Holidays everyone! I hope you’re all having a merry old time.

I’m not, I’m spending it with family, so by default it’s crap.

Regardless, it’s a time of celebration, joy, and consumerism, as people give gifts, get drunk, and have fun.

But what kind of gifts? Toys are a given, every child loves toys. Makeup is a common gift for girls and women, and many people give clothes because they like to think practically. Some people also give cash or gift cards, the lazy prats. Gift cards are the worst because they’re actually a step down from cash. They’re just as practical, but only valid at one location and often for a limited time only. And if the store closes down, you’re fucked!

But even cash annoys me because it shows no effort. This is something I mentioned before: The real meaning of a gift should be in how much effort and thought is put into it. Saying, “here’s a twenty,” involves absolutely no effort, and even less thought.

So what did I get for Christmas? A $25 prepaid Visa card. Okay, that actually costs more than cash and is exactly as useful. However, I guess I could use it online. That’s a plus.

But there are other gifts one can give. For instance, some people give pets for Christmas. Dogs, cats, that kind of thing. Which is great. There’s a lot of love one can get from a pet, and it can last a lifetime. But it’s important to remember that. It’s important to remember, as every animal shelter on earth needs to remind everyone every goddamn year, that “A pet is not just for Christmas!”

Basically it means people are taking in animals at Christmas, and giving them as pets, without thinking it thorough. Without considering the costs and responsibilities that come with pet ownership. And this is evidenced by the fact that most pet shops and animal shelters see an upswing in pet sales/adoptions in the run up to Christmas, and an associated upswing in the number of returned and abandoned pets in the months following.

You see, it’s fun for a couple of weeks, or maybe even months. Then you realize you have to feed this thing, and reality hits like a ton of dog shit you need to pick up!

If you’re going to get a pet, keep it. This shouldn’t be too hard to understand! Pets are great! They’re constant companions that’ll always stay with you. And if you don’t think you want that, don’t get one at all!

And while we’re on the subject of pets, let’s talk about another episode of Littlest Pet Shop. Where the lesson is simple: If you’re going to buy a pet, keep it! Don’t be a pet-tease! You cocks!

Our story starts at Blythe’s school, when an announcement comes reminding people that tomorrow is Pet Appreciation Day, where everyone can bring a maximum of two pets to the school for reasons.

Obviously, Blythe wants to bring a few pets, even though she doesn’t own any pets, and only takes care of them.

Regardless, she has to pick two of her friends to bring. And this intensely dramatic situation ends up being resolved over the commercial break, because she randomly picks Penny and Vinnie. 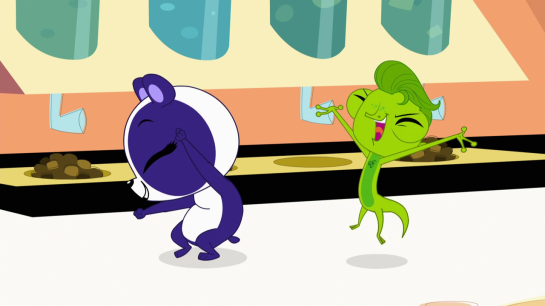 Yeah, forget drama, we got an A-plot to get to. Because once they learn participating in ‘Pet Appreciation Day’ would get them out of classes, the Biskits decide to sign up. If only they had any pets.

Well, there’s an easy fix for that. 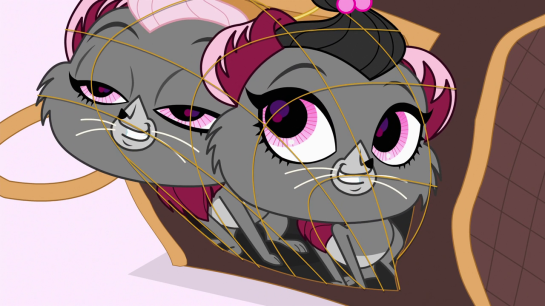 Meet Velvet and Cashmere. The Biskits’ brand new pet chinchillas, who are (oddly enough) twins. And they are quite excited to have new owners, but are less excited when they learn the Biskits plan to only keep them for one day. 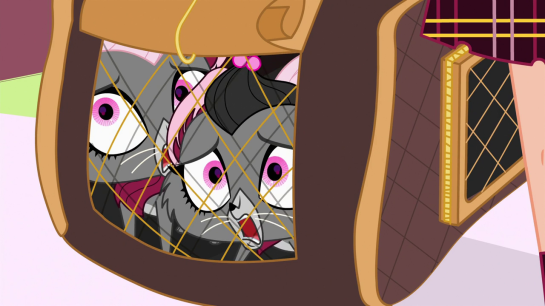 We can all agree that’s not on.

So it’s up to Blythe to find these two a proper home. But sadly, something tragic happened: They’ve already bonded with the Biskits.

That’s actually a fantasy sequence… obviously. But the point is they actually like the Biskits! Primarily because their personalities are quite similar. They’re shallow, irritable, self-centred, snarky, and very very furry. And this is what the chinchillas find so endearing! Boom!

In all seriousness, that does describe the chinchillas as well. They’re snarky to Blythe shortly after they meet, they find her annoying, and they mainly want to stay with the Biskits because they’re rich.

So Blythe tries to talk the Biskits into keeping them.

Blythe: Pet ownership can add a lot to your life.
Brittany: F.Y.I. Blythe, we like our lives just the way they are.

Seems to me they’re just scared of change. Scared of something interesting and different happening in their lives.

And if Blythe had thought to mention that, that might’ve been enough to activate their super-ego powers, and get them to keep the adorable little rodents.

But they don’t. So it’s hopeless. Right?

Well, thankfully, Vinnie and Penny have their own advice: Just be nice. So they try to be nice.

They don’t take this revelation well.

So the standard advice comes: “Just be yourself!” And they themselves are assholes. So it’s time to show the Biskits that.

They start by being rude to the other students. And as one of them starts commenting on it, the Biskits begin defending their little chinchillas by shouting! 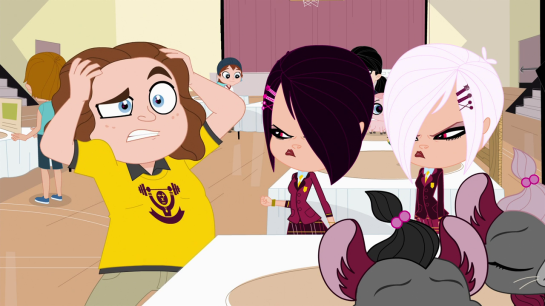 Aww, it’s almost as if they care!

Then Vinnie decides to enact his own plan, by jumping on the their giant heads!

So they freak out, and the chinchillas come to the Biskits’ defence, and run after him; kicking off a large-scale chase sequence with every pet at the exhibition!

The entire room is driven into complete chaos, impressing the Biskits. And what impresses them even more is that the pets actually come when they call them… with a giant megaphone.

Why do they have that?

But that’s not enough to get them to keep the pets. So Blythe brings out the big guns.

Blythe: I don’t think you should keep them!
Biskits: We’re keeping them!

Yes, they keep them out of spite. Okay, it’s mostly love, but a bit of spite.

But will they be well cared for? Well, apparently Francois grew up on a chinchilla ranch. So he knows how to take care of them.

I imagine that’s how it went.

And as that plotline comes to a close, I’m not sure what to make of it.

The Biskits get a couple of pets, are initially hesitant, but in the end decide to keep them. Which is completely in character for them, but might be a sign of significant character evolution, as they learn to be a bit less selfish.

I hope we see more of these two chinchillas, but I doubt it given the series’ record. I find it funny that this show has so few recurring characters, and more importantly, that the most frequently recurring character happens to be the most annoying rabbit in the world. And we need more Sugar Sprinkles!

But all that aside, the episode itself was well-written and enjoyable. A fun ride and a bit of drama. And meanwhile, as all that’s going on. Sunil tries his paw at painting. 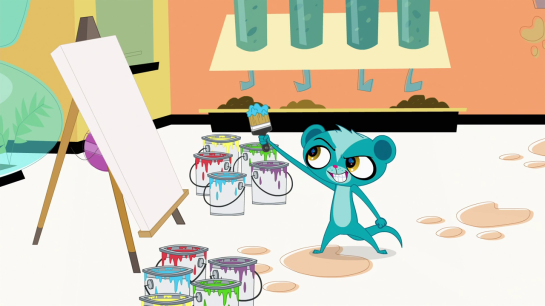 This is a plot thread that goes absolutely nowhere, and is just a sequence of absurd gags where the laws of probability curve toward a what-the-fuck scenario.

Yes, he keeps missing the biggest thing in the room. You wouldn’t think aim would be the part he fails at.

But I guess that would’ve been the only way to accurately depict the idea that Minka’s a skilled painter. She can actually get it on the canvas! Which you’d think is a very low bar if I’m honest.

But like I said, it goes nowhere, and feels pointless. Sunil says he now appreciates Minka’s work more than ever. But given that her great skill appears to be aim, I’m not buying it. Plus it’s undermined by Minka mentioning that she probably can’t do magic (which would place them on even footing), only to have her pull a coin out of his ear.

Wow, thanks for undermining any attempt to teach people to appreciate other’s talents, you pricks.

Regardless, this plot thread feels more like pointless filler than anything. But it is quite funny, if a bit predictable.

Overall, not the show’s best moment.

But the rest of the episode was great. I’ve always thought the Biskits had a lot of potential that the writers rarely made use of. This time, they made use of it. We saw a bit of in-character growth from these two, and I for one appreciated it.

But the overall lesson, that one shouldn’t abandon pets by the side of the road, or just use them for one day, doesn’t feel particularly well-executed. It would’ve been nice if we saw the consequences of pet owners lacking foresight. But that might’ve been too dark for a kid’s show. However, regardless of execution, I do think it’s an especially appropriate lesson for this time of year. Sadly, this episode was released in July and I only recently got around to watching it.

One response to “Not Just For Christmas: “Two Pets for Two Pests” review”