I’ll be honest, my favourite characters on My Little Pony have to be the Cutie Mark Crusaders. The primary reason for this is their potential. Like every other member of the main cast, they are extremely well-developed as characters. But they’ve gotten so little screen time, that the directions they can be taken haven’t been fully utilized yet. So many potential stories here. Plus, they’re young, so they still have much to learn, and much to develop.

The same goes with Spike, one of my other favourite characters. But I’m not talking about him, today.

And the directions these characters have gone in already show great potential. We’ve explored the relationship Sweetie Belle has with her sister, we’ve explored Apple Bloom’s personal insecurities, we’ve also explored the tenacity and terrible priorities of these characters. But the one character that has gotten virtually no exposure, is Scootaloo. We’ve never met her family, and we’ve never seen her personal life away from the Crusaders. Which is probably why the fans have assumed she’s an orphan.

Last season, we got close. An episode devoted to Scootaloo’s relationship with Rainbow Dash, and her own insecurities. But it didn’t really go very far, and she ended up being overshadowed by Princess Dom Cobb there. So that was underwhelming.

And one thing they seem to avoid during the episode was the issue of Scootaloo’s wings. So far, the fact that Scootaloo can’t fly has become more of a running gag than anything.

Why haven’t they dealt with this yet? Why can’t Scootaloo fly? We know it’s not because of her age, because Rumble, who appeared to be around the same age as her, could fly. Would she ever be able to fly?

If not, it would be an interesting topic to address. Not only to deal with the how and why, but the emotional consequences of learning that the one thing that defines a pegasus, is the one thing she can’t do. It’s like being an Asian who sucks at math, or an Irish bloke who can’t hold his liquor, or another racist joke.

Thankfully it seem as if the writers were at least trying to deal with this in a recent episode. Too bad it was completely half-assed.

The show opens at the local elementary school, where the head of the Equestria Games is introduced: Ms. Harshwhinny! What? I thought she was just an inspector for the games. Look, writers, I know we all want to pretend season three didn’t happen, but could you guys at least try to maintain a level of consistency?

Anyway, as Harshwhinny begins her presentation, Rainbow Dash bursts in through the window, instead of using the door like a normal pony, and then proceeds to act like an asshole, interrupting her associate in the middle of her speech.

Of course, Harshwhinny gives her a good bollocking, demanding that Rainbow curb her enthusiasm and try to act professional… while standing in front of a classroom full of students. Now in case you didn’t know, that’s the least professional thing she could have possibly done. 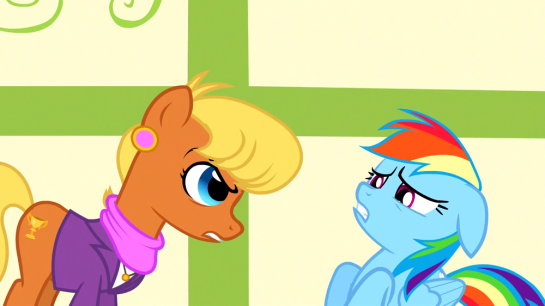 It’s standard practice in these situations to pull your associate aside, or outside, and then tell them to calm their shit. You don’t do that in front of an audience. That’s just embarrassing for all concerned.

And already I find a major problem with this episode, in opens in the most awkward way possible. We have Rainbow being a rude bastard, and Harshwhinny being an inconsiderate bint! And it seems as if the animators decided to have some fun with Harshwhinny’s mouth, in a way that feels a bit jarring on a show that normally has a very consistent visual style. 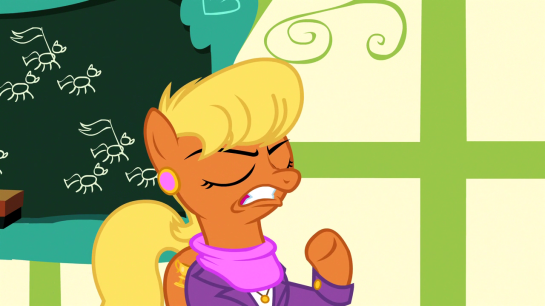 Even the dialogue seems a bit stilted. When Rainbow flies in and screams, “That’s right!” and there was nothing that ‘that’ could be referring to!

I know it’s a bit nitpicky to focus on this one scene, but it’s a major problem since it’s the first scene! It’s meant to set the tone, and the tone is awkward and uncanny!

Place your bets! My money’s on the one character who never spoke before. The purple and blue girl. Because that would certainly make the episode more interesting, rather than continuing the pattern of having the main characters win at every endeavor. But I digress.

Of course, the Crusaders decide to enter. And then we get a musical number called “Hearts as Strong as Horses.”

What is a horse anyway?

No, I’m serious, in the context of the show, what is a horse!? We’ve never seen horses on the show before, so I assumed they were non-existent, or replaced by ponies.

Then again, there was this.

But still, it’s a bit confusing, isn’t it? Perhaps it’s some other unseen species that-

Okay, no, because assuming that’s supposed to be a ‘horse’… well, it’s not a horse, it’s a pony, it’s a stallion. I can tell you that with 100 per cent certainty. Given the shape of the body, and the head, it’s just a regular pony.

And yeah, this tiny little inconsistency pulled me out of the song the first time I watched it. But on second viewing, it’s pretty good, very catchy, just weird.

So, yeah, big pointless musical number that adds nothing to the plot.

As the song closes they get a bit of trash-talk from Diamond Tiara. Trash talk that can be summed up as: You have no cutie mark, therefore you suck. Can she come up with something different next time? PLEASE!? She’s like a damaged record, repeating the same eight-second loop over and over again. It’s getting old.

Anyway, the theme they come up with is basically ‘diversity.’ And the next day, they show off their routine.

They successfully ‘wow’ the Rainbow Dash, which confuses me, but let’s run with it.

Meanwhile, Diamond and Silver Spoon observe from the bushes, and are also amazed. But they can’t let them win, and calling them the same thing they called them a million times before didn’t demoralize them enough, so it’s time for a new strategy. FRIGGEN FINALLY!!! They decide to target Scootaloo, and her inability to fly. And it works for all the reasons I gave earlier.

Scootaloo decides they need to modify the routine. She needs to fly!

Naturally, her friends are skeptical

They work all night, while Scootaloo, stubborn little foal that she is, keeps trying to fly.

The next day, they’re ready to demonstrate to Rainbow Dash, one last time, and suck. 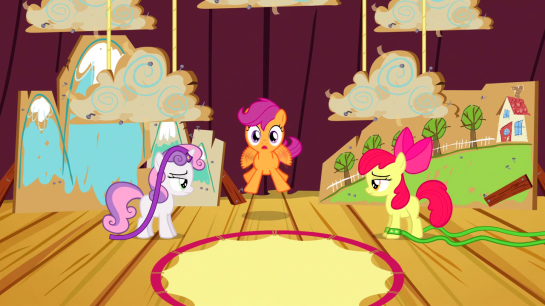 Sweetie Belle and Apple Bloom go home to get some angry sleep, and Scootaloo keeps trying to fly.

You know, this is why Sweetie Belle’s my favourite pony. She seems to be the only sane one.

The two of them board the train, and it takes off. Then, when Rainbow learns they left Scootaloo behind, she tells them off, stops the train, and drags them back to Ponyville.

They find Scootaloo, in her house, which is finally established to exist. And Rainbow explains that flying isn’t really important. She doesn’t have to fly, her routine was great without.

Then Scoot’s voice goes up an octave, as she asks, “What if my wings never grow? What if I never fly?” Valid question, but why did her voice change like that? She sounded like a baby.

Anyway, Rainbow gives them a pep talk, and they begin their trek back to the Crystal Empire, utilizing their own method of transportation.

That’s not health and safety.

Anyway, they arrive, they win, Harshwhinny has a stroke, and the end.

So, like I said, the episode was a bit half-assed. And the biggest problem is, while they sorta touched on Scootaloo’s disability, they never actually said that she was disabled. They just said she can’t currently fly. I was kinda expecting that we’d learn that her wings didn’t develop properly or something. Instead, they sorta danced around the issue, like they didn’t want to commit to it.

Now, it’s possible that, despite what was intended by Lauren Faust, the current staff do not intend to make Scootaloo permanently disabled. Instead, her lack of flying is merely a short-term thing. She might just be a late bloomer.

It’s also possible that they’re slowly building this. That they’re gonna reveal in an upcoming episode that Scootaloo is disabled, she just didn’t know before. They’ll have a scene where a doctor diagnoses her with acute embryological winged bollocks–or something like that. And that episode will deal with the emotional implications.

I have no idea what they’re planning, but I do know this was a good episode. Yeah, the opening scene and the musical number threw me, and honestly, I think it might have ruined the rest of the episode. But after rewatching it, I noticed that the bulk of the episode was much better than I remembered. So, perhaps my opening was a bit unfair. Then again, the writers should’ve been aware that the opening is what people would remember most, and if it’s shit, it can contaminate the entire experience.

So, I guess that means the entire episode was terrible. Oh well.

2 responses to “Disclaiming Disability: “Flight to the Finish” review”