This week on My Little Pony, we witness an interesting phenomenon: The application of critical thinking.

Remember back in season one? The episode Feeling Pinkie Keen was all about Pinkie’s precognitive abilities, and Twilight being extremely skeptical, and continually searching for a more logical explanation, but in the end just accepts it without another thought.

This pissed off a lot of skeptics. She should not have just accepted that Pinkie had superpowers, she should have vehemently denied their existence. Well, I disagree, primarily because the events of the entire episode verified Pinkie’s abilities. The thing about the supernatural is this: Skeptics don’t simply not believe it exists because it doesn’t fit any models of known science. We don’t believe because there’s no evidence that it’s anything more than deception.

If you can prove that you can predict the future, beyond any doubt, and can do it over and over again, I will believe you. It’s easy: just tell me what this week’s Lotto numbers are…and do it more than once to prove it’s not just a fluke. After that, we can work on modifying, adding to, or replacing the various physics models we use, so they fit this new evidence.

Prove there are ghosts, and I’ll willingly throw out the Theory of Relativity!

But still, it pissed off a lot of skeptics, and I guess I can understand. It might send the wrong message to children who wouldn’t see the big picture. But this week, it appears they’re making up for it. When we see Pinkie call up her inner Greg House and learn how to be a bit more skeptical…kinda. END_OF_DOCUMENT_TOKEN_TO_BE_REPLACED

We all have biases. This should not be news. Unfortunately, it is.

Ask anyone, any politician, any pundit, anyone who has any opinion about anything, what they base their opinions on, and they will likely say facts, or proven concepts, and their views are inherently more true than all those who oppose them. But facts are immovable, facts are not open to interpretation, and if they all disagree on one issue or another, they can’t all be right. So how does that work? I think I know.

You see, whatever one’s opinion is, they always look for evidence that supports their opinion, and ignore all evidence that refutes it. It’s how an otherwise pretty intelligent guy such as Bill Maher can bash the Tea Party, and say Greenpeace, the ACLU and MoveOn.org are not their liberal equivalent because unlike the Tea Party, they are “educated people.” Yeah, one could debate that Bill. I’m not saying he’s wrong, I’m saying when you dismiss someone’s opinion because you think they are stupider than you, you have needlessly crippled yourself. 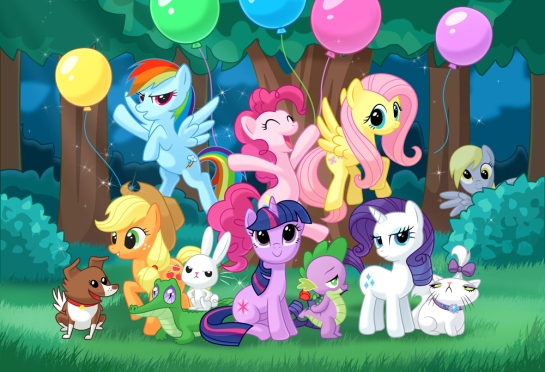 We are back to this. My favourite TV show since Stargate Universe was cancelled, is My Little Pony: Friendship is Magic. A show about pastel-coloured ponies, unicorns and pegasi, who live in a world of magic, royalty, and cities made of clouds. Though, typically that’s not how I would sell it. END_OF_DOCUMENT_TOKEN_TO_BE_REPLACED