No, I don’t know what fear is. And I honestly wish I did. Even after taking a course in Psychology, it still doesn’t make sense to me.

All I know is what can cause it; typically a bad experience. For instance, it was over a year ago that a rocks glass mysteriously shattered in my hand, and caused a lot of bleeding, and now I’m deathly afraid of glass… alright, that’s a lie, I haven’t developed a fear of glass, even though I expected to.

Can fear develop spontaneously though? Yes it can, apparently. It just didn’t with me. I don’t know why, you’d think I’d be more vulnerable to that kind of stuff.

But that seems rational, right? Now how did that fear develop? I have no idea! I remember when I was a kid going on trips with my class to the woods, where there were rocky crags and cliff faces, and they made me nervous, but I don’t remember ever falling from one, or seeing someone fall from one.

Maybe some fears we’re just born with, and they have no origin story. Maybe some are in our DNA, and have developed over the past million years of evolution. And fear of heights definitely gives you an evolutionary advantage.

So, in that case, how might someone develop a fear of clowns?

Yes, some fears are irrational, and may develop through mysterious and random or unusual circumstances; or Stephen King films. And we may know they’re irrational, but that doesn’t stop us from having them. It’s the biggest problem with having an anxiety disorder, knowing about it doesn’t fix it.

But you can get over your fears. One way is through ‘systematic desensitization,’ according to my psychology text-book. Basically, you are gradually exposed to your fear, as you tried to stay relaxed. In a way, it’s like bringing the tide in, to slowly push your fears away.

The other approach is flooding, where you expose yourself to the greatest element of your fear, and as you panic and shout, ‘get it the fuck away from me,’ the doctors will just ignore you. In a way, it’s like bringing in a tsunami to take your fears down like it’s Indonesia.

Eventually, the idea is to prove to them that nothing bad will happen. It’s penetrating that outer shell of human reason, all to prove to their monkey/lizard/fish brain that their fears are unjustified. And over time, that fear does go away. Of course, then they might develop a fear of psychologists.

And who knows? Maybe that’s the best way to do it. To get someone to confront their fears and face them head on.

Which brings me to Littlest Pet Shop, where we deal with primal and irrational fears, and attempts to defeat them.

Our story starts with the arrival of Tess McSavage, television presenter and world-renowned zoologist.

She hosts a show called Secrets of the Wild, and Penny’s a huge fan! But you may be asking: Why the hell would she be coming to Littlest Pet Shop!? Well, primarily because she’s an old college friend of Twombly!

“You went to college!?” – Morgan Freeman

I’d like to assume Twombly studied Business Management or something. But given how previous episodes have gone, I’d doubt that.

And the second reason for Tess’ arrival, is because she’s taking a vacation, and wants to come to the big city to ‘get away from it all.’ I guess by ‘all’ she means fresh air, wilderness and wild animals. I understand, it must get boring after a while.

So Penny, being the fan that she is, is very excited to meet the TV star, and wants to show what makes her ‘special.’ Because apparently, explaining what makes every animal special is a regular feature on her show. And what makes Penny Ling special? HUGS!

I thought she was a gymnast.

So, let’s get to the bottom of this fear. Blythe and Twombly quickly decide to ask her about it. What triggered it and why. The answer? Oh, she doesn’t have a fear of pandas! What’s wrong with you!?

That’s right, she’s also in denial. In fact, she denies even seeing Penny Ling, much less running out of the room in a panic. And as evidence of her lack of phobia, she offers photos of her getting along with polar bears, grizzly bears, and baseball mascots. 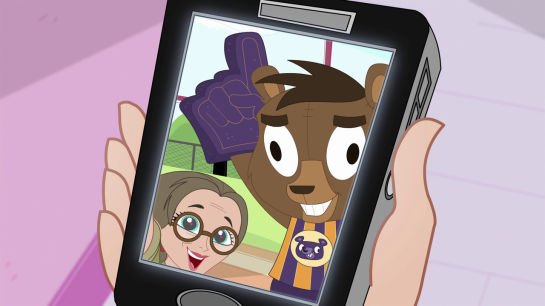 That doesn’t count, and it proves nothing, because none of them are pandas.

Nonetheless, Penny’s really hurt by this, and Russell attempts to cheer her up by explaining that it’s probably not her specifically, but all pandas.

Yeah, that’ll cheer her up. Just explain that it’s not one man specifically that the Ferguson police hate, just all black people! That’ll calm the civil unrest!

See, the US government didn’t put all Japanese into internment camps because of something they did, but simply because they were Japanese. Doesn’t that make it better?

Why am I comparing a phobia to racism?

Anyway, Zoe’s a bit skeptical of Russell’s analysis. How can he possibly know? Well, because Tess ran screaming the moment she noticed Penny was a panda, and Penny didn’t do anything remotely scary, and no one else is frightened of her. I think that proves it.

But Russell decides to run a controlled experiment using Pepper’s gorilla costume, because she has one. 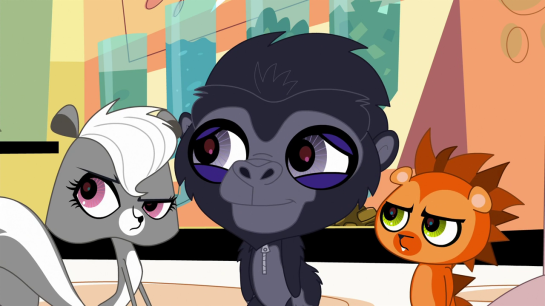 Oh, this is sure to work. I mean it’s a really good costume, save for the zipper. But regardless, you can’t tell she’s a panda.

So they get her to meet Tess again, and how does she react? 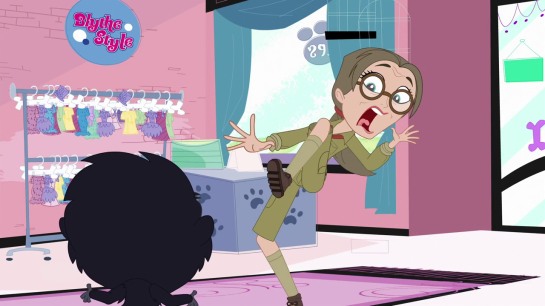 Yes, by an astonishing coincidence, Tess has an irrational fear of gorillas as well. Alright, I’m calling bullshit. I’ll buy a zoologist managing to cover up a fear of a single animal species, primarily by avoiding their habitats. But two? While continually denying it after running and screaming from the room?

So what could explain it? Well, if it was a recently developed fear that might be within reason. It might also explain why she’s taking a sabbatical. So Blythe does a bit of Googling, and finds a news story about how Tess McSavage recently ran screaming from a gorilla sanctuary.

Well, I think we’re on the right track here! Also, the gorilla that she encountered was recently transferred to the Downtown City Zoo because of reasons. Oh, what a coincidence! This might be the most contrived the series has ever gotten.

But whatever. Blythe goes to chat with the gorilla, voiced by Trixie from My Little Pony.

Her name is Sunshine Sweetness, which they mention is weird, and makes me think they’re actually trying to take the piss out of My Little Pony. Which is legit, I’d have to admit.

Anyway, Sunshine tells the tale of the time she met Tess McSavage. It involved her toy panda, Squeezy, whom she walked away from briefly while she grabbed lunch. And as Tess ran across the plush panda, she immediately picked it up, and once Sunshine spotted this, she got a bit territorial. 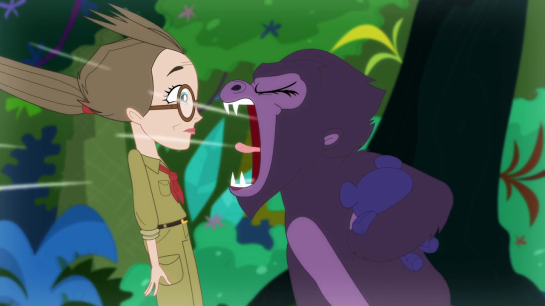 Okay, a lot territorial. But at least everything has been explained, though you’d expect a zoologist to be more aware of a gorilla’s territorial nature. Being that shocked makes her look a bit naïve, or just plain stupid.

So I explained earlier that there were two ways to relieve someone of their fears. The first is systematic desensitization, and the second is flooding. And in this situation, Blythe decides to try flooding because that won’t end badly. She brings Tess to the zoo, and she’s quite excited.

Wait, I thought she wanted to take a break from wild animals. Why is she so excited to visit a zoo!? Why isn’t she rolling her eyes and sighing: “Uh, more work”?

Blythe introduces Tess to Sunshine, and Tess has a bit of a fit. Not helped at all by the fact that Sunshine is agitated because she just lost her doll.

Thankfully, the pets arrive, so Blythe assigns them the duty of finding the doll. But Penny takes it upon herself to replace it instead.

Yes, that’s the back of Penny’s head. And by an astonishing coincidence, Penny looks just like the doll. What are the odds!?

So Sunshine has sufficiently calmed down, and in turn, so has Tess. Blythe explains that Sunshine was just concerned for her doll, and realizing that she was an idiot, Tess’ fears immediately evaporate.

Well, that was resolved quickly. One would expect it to take a bit longer given the obvious psychological trauma. But there’s less than three minutes left in the episode, so they needed to wrap this up. Especially considering we have a new issue we need to resolve: Penny’s sorta being held hostage. So Tess breaks into the gorilla enclosure, and tries to talk Sunshine into giving up Penny. But it doesn’t work, until Tess just happens to find the original doll in less than a minute of searching.

This entire episode is getting really contrived.

So Tess’ fears are gone, Penny’s safe, and she can now demonstrate what makes her special.

Yes, hugs! And the episode ends with everyone happy, except me.

I think the biggest problem with the episode is Tess’ fear. The idea that a world-class globetrotting zoologist would develop a pathological fear of gorillas because one gorilla yelled at her, seems quite unlikely to my eyes. If she was mauled or something, I could understand, but I guess that would’ve made the episode too dark.

You see, the problem is, a zoologist is an expert on animals. They understand animals and what makes them tick; and if you fully understand something that is not a real threat, why would you be afraid of it? And even if it was a real threat, you would know how to neutralize it easily. Also, that couldn’t have been her first encounter with a gorilla. Why didn’t she just assume it was an isolated incident?

I think it would’ve made more sense if it was just a fear of pandas, and wasn’t new, but one she had since childhood yet had sufficiently covered up over the years. Sure, it would’ve been unlikely. But hell, Barbra Streisand has stage freight so it’s certainly possible.

Let me put it this way: You won’t see me developing a fear of computers or the internet. I know them too well. I know what they can do, and what they can’t do. And I know how they do it. I’m not being an egotist, I’m studying this stuff right now! I’d better know how to use it!

But other than that, there’s really nothing to complain about. Vinnie acts like an idiot, Russell acts like a genius, Pepper is a cool dose of sanity, and all the while Blythe continues to use her powers for the forces of good. It’s a pretty decent episode, but nothing blew me away, and there weren’t many good gags, just a new character being stupid. So I think I’d rate this as average and inoffensive, and I don’t think that’s a good thing. They really should try to offend me in the future, I’d be more interesting.

One response to “An Occupational Hazard: “What’s So Scary About the Jungle? Everything!” review”