Hey, remember about a month ago, when I reviewed Pinkie Pie’s arc-related episode, Pinkie Pride? Remember when I noticed that the photo of Pinkie’s family didn’t match up with the depiction of Pinkie’s family in season one? And remember when I made the joke about the extra family member being a bitter teenager who cuts herself? Turns out I was actually onto something! Because today, we’re actually going to meet her!

This is Maud, Pinkie’s elder sister! And she’s coming to Ponyville! And she’s awesome!

I say this mostly because of her attitude, and personality. And I know what you’re thinking: What personality? She has none!

Oh, I beg to differ!

You see, when they were children, Maud taught Pinkie the family rock candy recipe, which features a special ingredient: rocks! No it’s not a stone soup thing. It’s a special type of edible (I assume) rock that Maud discovered. Which begs the question: If it’s a family recipe, and Maud discovered the secret ingredient, is it not just Maud’s recipe? One assumes that a ‘family recipe’ would pre-date Maud’s birth. So how could she have discovered the secret ingredient in that case? I guess the writers didn’t really think that part through.

And it’s obviously not rock candy as we know rock candy. It’s not made by soaking string in a supersaturated sugar solution. It looks more like multicoloured rocks you can eat. 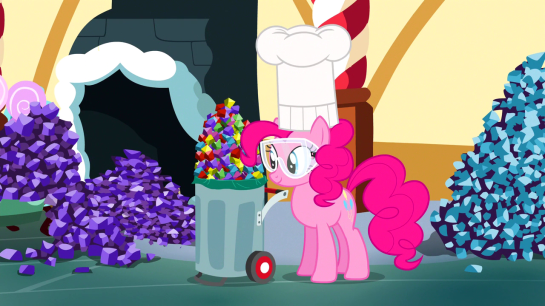 And Pinkie made a lot of the stuff, obviously. All so they could make rock candy necklaces, perpetuating a tradition that Pinkie and Maud had, signifying their friendship.

All well and good. But it quickly becomes apparent that they’re not gonna get along. Though I wouldn’t blame Maud for that. I’ll blame the other five for having expectations she failed to meet. Which is exactly what happened. She just did things in an unexpected way, and the others didn’t know how to react. Well, that is except for the point where they play ‘Camouflage.’ Where I think Maud was just messing with them.

I mean, that really is the only explanation I can think of. During their introduction, Maud responds to the question of: ‘What does your dress say?’ With, “It doesn’t talk, it’s a dress.” Which is pretty snarky, and relatively clever, and deserves a response of: ‘I meant, metaphorically.’ Not a period of stammering like Rarity does.

And I don’t understand why Fluttershy reacts with fear, just because Maud owns a pet rock named Boulder. 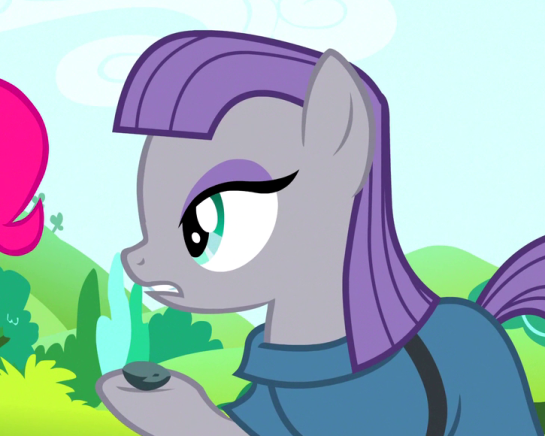 There are stranger pets.

And the rest of the episode more or less continues on a similar vein.

Rarity tries to make a dress for Maud, but she just grabs a dish towel, and drapes it over her back, and says that it’s fine. Which is interesting. She’s obviously a very conservative dresser, and doesn’t need anything too frilly. Begs the question of why she chose a dish towel, though.

But Rarity’s reaction is the interesting thing. She just acts nervous, and possibly disgusted. Why not mention you wanted to make a proper dress for her?

Later, she helps Applejack make cider, by smashing apples with rocks, when Applejack asked her to peel them. And Applejack’s reaction aptly demonstrates the main problem behind their interactions, as she just slowly backs up without mentioning that isn’t the proper way to peel an apple.

And because of this, they have to break the tragic news to Pinkie: That they just don’t feel like they’re close enough to Maud to make necklaces with them.

Then, Pinkie becomes heartbroken for some reason. But later that day, she comes up with a solution to make everypony best friends!

Oh, don’t worry, it gets stupider.

As Pinkie explains it, this is supposed to combine everyone’s interests into one giant activity. And this tells me that she doesn’t know what the word ‘interest’ means. Since I’m pretty sure Applejack isn’t interested in swimming in apple sauce. And Twilight isn’t interested in running through walls, even if they’re made of books.

And the last obstacle is a rock slide. Which I think she means as a slide made of rocks. And not the rock-based equivalent of an avalanche.

Unfortunately, that’s not what it ends up as. And Pinkie just happens to be stuck on the damn thing, just as it starts to collapse. 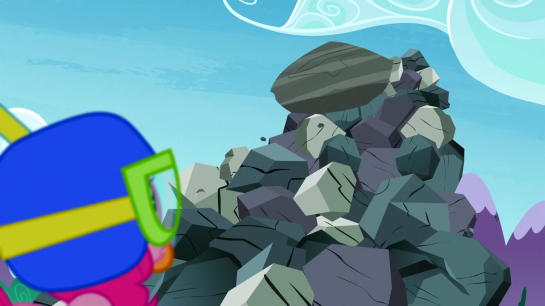 Well then, good thing you have an alicorn princess who can fly up and use her magic to shield her friend from the giant rock! Right? Twilight? You gonna move?

No! Instead Maud runs over and uses her hooves to jack hammer the rock into submission–I mean rubble. 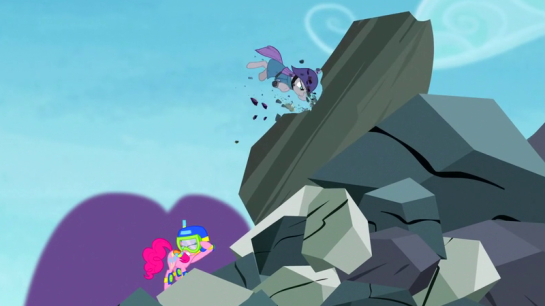 And so, because of that near-disaster, Maud explains to Pinkie that even though Pinkie wants them all to become friends, that’s just not going to happen. So she decides to leave Ponyville, and head back to the rock farm. And Pinkie decides to go with her, since it’ll be a long time before she’ll get to see her older sister again, since she’s leaving to earn a ‘roctorate in rock science.’

Oh, by the way, whoever wrote that line is an ass. Roctorate? It’s not funny. It’s not even a pun, it’s just stupid!

Anyway, after witnessing Maud’s heroic act, the other five realize that they have something they can bond with Maud over: Their love for Pinkie Pie! And that’s certainly enough to base a friendship on, right?

Well, not really. It’s enough to create a friendship-by-proxy, but one would think you’d want to base it on something more.

No, instead, they just end up basing their friendship on the fact that they have a common friend, and they all make necklaces for her. And the episode ends with us learning that Maud, not surprisingly, doesn’t actually like candy and just keeps the necklaces in a box.

The strange thing about this episode is that, I’m not exactly sure what it was about. Not much happened. It just felt like a series of awkward social encounters, and I’m not sure that’s enough to base an episode on.

I really liked the character of Maud Pie, she was fun. Though I have to wonder if the creation of a new character was entirely necessary. I don’t understand why they didn’t use one of Pinkie’s already-established sisters. Neither of them have had any sort of character development, so having them be the deadpan intellectual would’ve worked fine. Instead, they introduce a new character and say, “oh yeah, she was in that flashback, you just didn’t notice.”

Then again, Maud is constantly deadpan, and Pinkie’s other two sisters were dancing around with plenty of enthusiasm back then. So that might not have fit.

And while we’re on the subject of Maud. Let’s talk about her expertise on rocks, since there’s not much else to talk about.

Her first big rock-related insight is that one particular one is a sedimentary. Which is something I learned in grade three! Hey, what type of sedimentary rock is it? Is it Limestone? Dolomite? Gypsum? Shale? She doesn’t say. In fact, that could’ve powered half the episode. Her expertise in geology could’ve even allowed one of the Cutie Mark Crusaders to make an appearance, as she critiques their new rock collection. She could even look at their index sheet and inform them that ‘pretty shiny one’ is not the proper term for that particular specimen.

In fact, you know what would’ve been great!? If her language was more erudite than the others, and because of that, no one could understand her. Particularly when talking about rocks.

I mean, she’s supposed to be an intellectual, but doesn’t actually seem particularly intelligent. Don’t get me wrong, she doesn’t look stupid! And one doesn’t have to constantly use big words to be smart! But, it would be nice if she did when talking about things related to her chosen field. Even her rock poetry seems juvenile.

Rock… you are a rock… gray… you are gray… like a rock… which you are… rock.

I’d expect that from a seven-year-old, not a pony going for her roctorate in rock science! (Still sounds stupid.) And poetry is the perfect opportunity to use big technical terms that few know!

I guess there were a lot of problems with the episode, but the overall experience was fun, and the performance of Maud Pie was certainly entertaining. And while her debut appearance was underwhelming, I hope to see more of her in the future. Perhaps her next appearance can be bundled with an actual plot!