I’ve been watching a lot of Once Upon a Time these days. It’s a show about fairy tales, old novels, famous poems, and pretty much anything in classic literature that Disney owns the rights to. Which is why next season, I expect a story line taking place in the Star Wars Galaxy.

I’m planning on doing a full write-up on this show, so I’m not gonna go into too much detail here. But suffice to say, one of the show’s most interesting elements is how they took classic villains; like the Evil Queen from Snow White, Rumpelstiltskin from… Rumpelstiltskin, or Captain Hook from Peter Pan; out of the old black and white, binary morality model of story, and turned them into interesting, dynamic, and even sympathetic characters. They’re given tortured back stories, explaining why they act villainy. We see them motivated not by greed, selfishness or vanity, but by things which we, ourselves, might find ourselves motivated by. We even see them side with the heroes whenever they feel the need. Which is actually more often than not.

But as a consequence, when we meet a real villain, one that we really have to hate, they end up taking off the brakes and turning back to the old tropes. But even then, they still avoid the binary morality trap, by giving the villain a back story we can understand. I mean, he was still an unsympathetic prick, but you understood why he was an unsympathetic prick. Even a stupid, selfish, amoral reason, is a reason.

But the important thing to note is that the old villains sided with the heroes to fight the real villains. Regina Mills, for instance, has had a very clear arc over the series, and is now one of the show’s most heroic characters, willing to give of herself for the sake of others. Or at the very least, for the sake of her son.

And her story’s been clear, and consistent. She worked hard to be good, and we all know why. She’s a character we can fully understand.

In contrast, another show with a former-villain turned supposed-good-guy has not been so consistent. It’s been more confusing, and bizarre, instead. And I’m starting to think he never went through any type of character evolution at all. Instead, he’s still the same douchebag he’s always been.

I say all this because his most recent appearance feels like a step back for the character. Last season, he had a major turnaround and decided to be good for the sake of his new friend, Fluttershy. And at the beginning of this season, he started acting as an adviser to the group, even helping Twilight get over her newly discovered princess-grade egotism.

You remember, it was a bit of a: Gee, Twilight, I didn’t know you were a bitch.

So, I thought he was on the upswing.

But that opinion changed, the day he arrived in Ponyville, with what he called the Blue Flu. 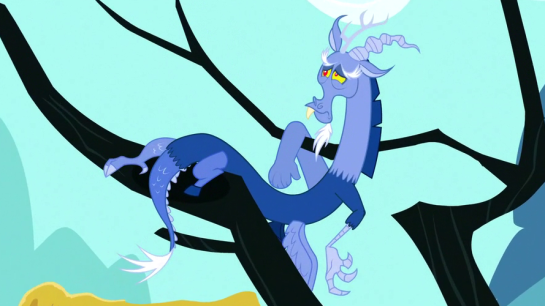 And he’s begging for help. Somepony to nurse him back to health. But Fluttershy just happens to be out-of-town, on a trip to see the Breezies (which is a plot-point that seems to only exist to get Fluttershy out-of-town), and Twilight and Cadance are out on a date. 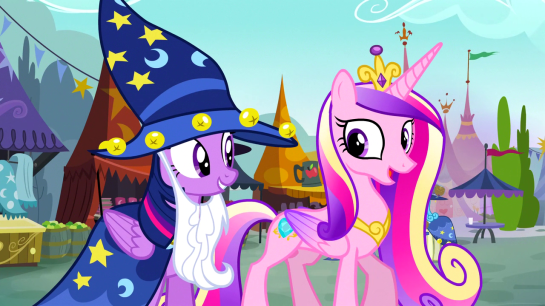 So with those two or three ponies otherwise engaged, and Spike falling into a wormhole or something, it’s up to the remaining four to deal with Discord, and oddly, none of them trust him.

Which, given how I opened this piece, might make sense. But they have no indication, at this point, that he’s untrustworthy. As I said, he’s turned a new leaf since their first encounter. At what point would they not look on him with constant suspicion!? What does it take!? What does he have to do!? Motherfucker’s dying here! 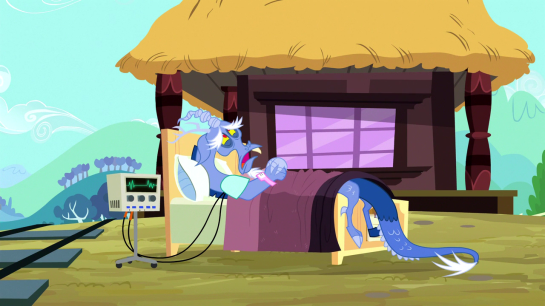 But instead, when he’s at his neediest, we start with Rainbow Dash absconding to Celestia knows where! Gee, so much for loyalty!

God, I hate Pinkie. I used to like her! What happened!?

So, Applejack and Rarity are left. But then, they get infected with the same illness. Which, given what we learn later, makes little sense.

So, Discord decides the only pony left who can nurse him back to health, is Twilight.

So he interrupts her date, and she’s clearly annoyed. Much more so than Cadance.

Dammit Discord! Stop cockblocking! Or whatever the female equivalent of that would be!

So, now, with Discord resting up, in Twilight’s bed, Cadance and Twilight are just about to go back to their date, when Discord makes a series of complicated requests, in musical-form. I say ‘musical,’ it’s more like free-form poetry. But it’s just a series of non-sequiturs and pop culture references, most of which have nothing to do with anything! 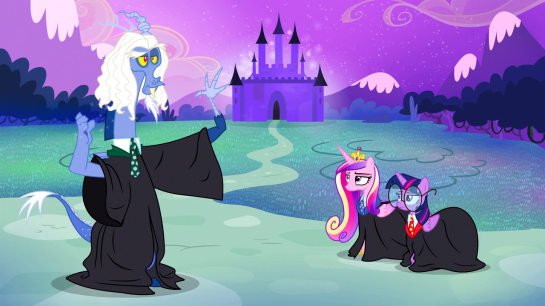 And then, we have something about the TSA because jokes. 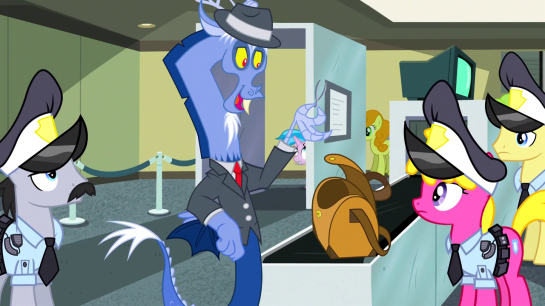 And it’s not even funny! The only thing good that came out of this? We learned that John de Lancie can sing. Who knew!?

Oh, and Twilight’s annoyed. That also came out of the song. So she decides she needs to find a cure so she can get Discord to piss off! Then he mentions that there actually is a cure, at the far end of Equestria. But he’s too sick to get it himself. So they need to go on a trip!

WHAT!? Okay, fine, he’s sick and needs them to transport him. But I don’t see why the chariot needs to be that elaborate, or made of solid gold! That has to be heavy as fuck! Is he taking cues from Trixie now!?

I don’t trust anything that’s easy to move.

So they land, find the flower they were looking for, pluck it, and inadvertently unleash a giant Lovecraftian sand worm.

Cue aerial fight, where they keep getting caught, and eaten, before escaping, over and over again, because they suck at aerial fighting. Eventually, the Shoggoth goes down, and pretty quickly because it’s sensitive to magical deathbeams. And they finally trap it back in the cave it popped out of.

So they get the flower back to Discord, and discover he faked the whole thing!!! But why!? You may ask! Well, because he’s a douche!

Actually, he claims it was a test to get Twilight to prove that they’re still friends. But I don’t believe him! Why? Because once he mentions that he ruined her date with Cadance, and Cadance explains that he didn’t ruin their date, he reacts with surprise, and disappointment.

No, turns out Cadance was getting bored in the Crystal Empire. I understand completely, those episodes are extremely boring. So she needed some excitement! And what’s more exciting than a journey to the furthest ends of Equestria followed by a fight with a Lovecraftian horror!?

So the whole thing was basically just a giant deception. Some game he wanted to play. Because he’s a dick! He’s a lying, disingenuous dick!

Why the hell was he even trying to ruin their date!? What does he have to gain from it!?

If I had to guess, I’d say he was performing some type of long con. He’s planning something big, and this is somehow part of it. And here I thought he was reformed!

Hey, Twilight, maybe you should try to get those elements back. The black vines are gone, so I don’t think the Tree of Harmony needs them as badly as you do.

But thankfully, Discord gets his comeuppance, as the Lovecraftian sand worm reappears, and sneezes on Discord, making him sick.

Thankfully, the princesses are protected by a germ shield, which is good. I want that spell.

But here’s the thing: Can we trust Discord anymore?

I say ‘no’! He ruined it! Oh sure, according to Fluttershy he ‘learned his lesson.’ But I respectfully disagree! I think he learned fuck-all! Wasn’t he supposed to learn to not be a dick last season!?

I don’t think asking for characters to evolve without backsliding is too difficult. And if you’re gonna let them backslide, give us a reason! Why are they backsliding!? What’s changed!?

When Regina backslid, there were reasons. In one case it was a very bad reason, but a reason nonetheless. Discord didn’t have a reason.

And apparently, if there is a reason, we’re not allowed to know what it is. I hope they figure this out soon, because until then, this episode is going on my shit list because of it.

But to be fair, if you ignore the bizarre character development, it was a really good episode. I’ve always sorta liked Cadance as a character, and I think this has been her best performance yet. Then again, in the past, she’s either spent most of the episode locked in a cave, tired, or getting her hair done. This is the only time she actually spent most of the episode doing stuff. And plenty of stuff to be sure. We see Cadance get snarky, clever, nerdy, humble and badass at different points in the story. So props to her.

Twilight, on the other hoof, was a bit of a bitch. Can she at least act as if she’s concerned for Discord’s well-being? I thought they were friends! I mean, yeah, he was faking it, but she didn’t know that!

Regardless, I liked it. And I’m glad I did. Because I haven’t been watching this show for the past month, thanks in-part to college work. So if the first episode I watched ended up being shit, I’d get really pissed. But it wasn’t. It was good. So that’s good. Everything’s good. Can’t complain when things are good.

Don’t you love it when things are good?

But wait. How did Rarity and Applejack get sick!? 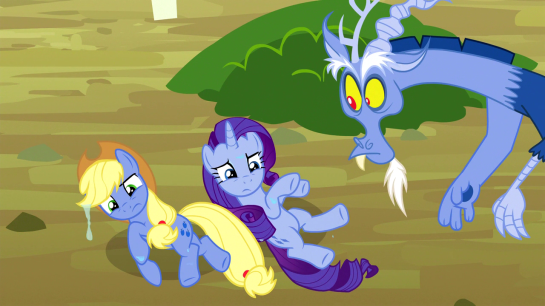