Why are superpowers such a common fantasy trope? I know it may seem like an obvious question, but it’s still worth asking.

And yes, before you ask, it is extremely common. Jedi, Magi, super soldiers, mutants. Generally, every fantasy franchise that has ever existed, featured characters who are more than human. But why?

Some may say it’s an ego thing. We like to imagine ourselves as having these great powers that we could use, and that’ll show everyone! But that’s not really true, is it? No, a proper ego trip would involve you imagining yourself as you are. If you’re already awesome, why add to that?

So if I had to guess, the real reason to fantasize about having superpowers, is due to feelings of inadequacy. One imagines themselves as being better than the shitty human being they are now. Imagining one has superpowers can really boost one’s self-confidence.

And there’s really nothing necessarily wrong with that, it can be a fun creative exercise if nothing else. For instance, I kinda wish I could jump 50 feet in the air. It’d make getting around town much easier. And like any fantasy, it’s perfectly harmless, unless the person starts acting like they really do have superpowers, but that’s a different category altogether. That’s not due to low self-esteem, it’s due to egotism and mental illness or LSD. Or a friend, tricking you in the most contrived way possible, as displayed on a recent episode of Littlest Pet Shop.

Our story opens with Sunil being introduced to a new product at the pet shop: an insect farm.

Turns out he’s not a fan of insects. But Blythe points out that the farm is actually empty, and just as Twombly is about to fill it up, she notices that all the insects went missing.

Where could they be?

Yes, for some reason all the insects start crawling all over Sunil. And there are multiple species on him, which confuses me just a bit, since if they were all supposed to go in the same insect farm, it’s more likely the different species would tear each other to pieces, which would make it a pretty shitty product.

So Sunil, covered in insects, completely freaks out. To the point that his scream reaches a pitch no pet can hear.

Well, no pet except Zoe. One would think one of the others would hear it as well, since there are many species who can hear sounds above the range of human hearing. But no, just Zoe.

And apparently, the sound is loud enough to attract a stampede of dogs, who in turn, destroy the pet shop.

They need a better door.

If only she had super telekinetic powers, he muses. Just like the hero in his comic book. Then she’d be able to clean the shop up in a minute.

But why does she lie and say she doesn’t have superpowers? Communicating with animals is a superpower! It counts!

But while she doesn’t have telekinesis, she does have the ability to recruit friends as slave labour. When was the last time Blythe ever did something for him?

As they clean up, Twombly finds Sunil in a compromising position.

How in the fuck!?

But she gets him out, and he runs off to hide. But as Penny tries to comfort him, he explains how ashamed he is. His fears caused him way too much pain, and now he has feelings of inadequacy. Which causes Penny a bit of stress as well, since she has no idea how to help him.

Then she spots Jasper’s comic, lying on the floor. Which she starts reading.

Meanwhile, it’s almost lunch time, so Jasper takes off to meet his mother, and Blythe explains she has to go too, since she’s helping Christie and Youngmee find a place to set up their truck for the lunchtime rush. Apparently she’s branching out into non-sweets.

Everypet wants to come, of course, and they all ask. But only Russell manages to explain that he might be able to help, since he was doing some research on ideal parking spots for lunch trucks. Seems like an odd topic to research, but whatever.

You see, this is why I love Russell. He’s clever. 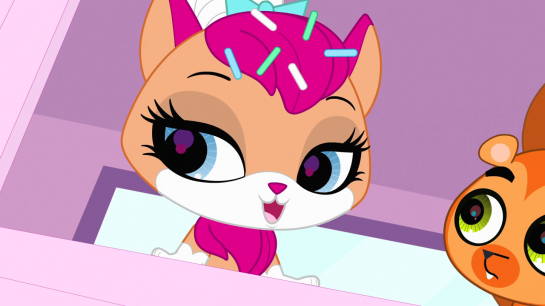 I’m so glad that Sugar Sprinkles made a return appearance, she was always my favourite character. Though I have to ask what took them so long, it’s been nearly a year now. She’s too awesome to spend this much time off-screen.

So they find the perfect spot, one with lots of foot traffic, and are just about to pull in when…

Da fuck did that thing come from!? And who owns a food stretch-limo!? Two guesses.

Of course. Apparently this is some business venture the girls are trying out. The truck is automated, serves shitty food, and sprays the customers with orange soda.

So how the fuck would they get any business!? Well, they reason, by forming a monopoly by way of eliminating the competition, which they do by taking up the entire street, preventing anyone else from parking there. But that wouldn’t work in this context. Even if they keep Christie out, they’re still competing against people bringing lunch from home, as well as people walking a few blocks to the nearest Subway! I’ve been downtown in a major city. There are fast food restaurants on every block, and in every building. The only time I saw a food truck is when they were selling something that wasn’t available in any nearby restaurant. So they might be serving ice cream, or your standard street sausage. They have to compete against what people are familiar with, so it has to be good. How the Biskits’ scheme even works is beyond me.

Best guess, it isn’t, but once they learn that Blythe is involved, they decide to keep operating the truck just out of spite. These girls are just terrible.

Then, on account of bad timing, the truck gets a ticket, since the gang abandoned it to confront the Biskits. But it’s then that the dog of the cop giving the ticket suggests that Russell and Sugar make sure the truck arrives at 9:30, before anyone else can take the spot. But if they arrive too early, they’ll get fined. Bit of a dilemma, isn’t it?

Meanwhile, back at the pet shop, Sunil is having another one of his freakouts after spotting a bug which turns out to be a dust bunny. Easy mistake to make, I recently confused a dead leaf for a squirrel. I need to get a new pair of glasses.

But Penny is determined to cheer Sunil up, so she tells him the tale of El Cobracabra, who has all the powers of various insects. She suggests that Sunil might be the next one, which is why all the bugs were crawling all over him. I’ll buy that, because I can’t think of another reason they’d be crawling all over him. Of course Sunil thinks it’s stupid, and tells her as much. So she asks Blythe to make two super hero outfits. The result?

It’s the amazing El Cobracabra, and Pandamonium! Every superhero needs a sidekick!

Of course, Sunil still thinks it’s stupid. Then, suddenly, a crisis unfolds, as Pepper finds herself stuck atop the giant fire hydrant toy. 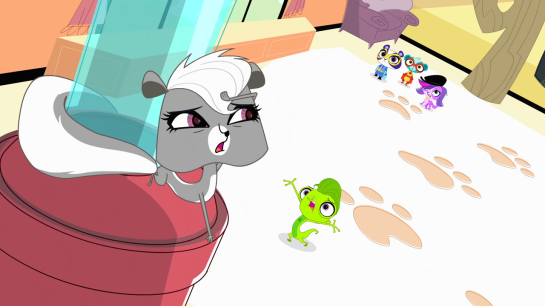 Then, without warning, Sunil finds himself shooting through the air.

Notice the pink tail around his waist.

Yes, the entire group is getting involved, as they all conspire to make Sunil think he has superpowers, and just saved Pepper’s life, even though he has no idea how he did it. And somehow, he’s convinced. Too convinced, since he decides to go out, into the wider word, by which I mean the rest of the pet shop, and do his super duty!

See, it’s harder to stage stuff out there.

So, he goes out and begins to try to use his powers. So to keep the illusion intact, Penny and the others have to fake his powers using more and more difficult and sneaky methods, exhausting the heck out of them.

Then, eventually, Sunil calls Penny to their secret lair. Which confuses her, since she never faked that.

That’s not secret, nor is it a lair. But it is a good lookout… uh oh.

Yeah, in case you forgot, he can’t actually fly. So Penny works quickly. 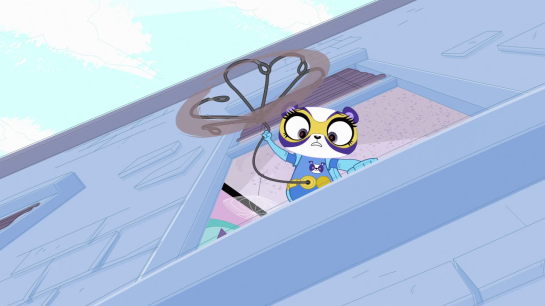 Wait. She has a utility belt!? That is awesome!!! You know, it is my firm belief that that counts as a superpower.

She quickly lassoes Sunil’s foot, because she’s also Batman, preventing him from becoming a stain on the concrete.

And once she pulls him to safety, Penny is forced to confess everything. Making Sunil feel like a fool.

Meanwhile, Christie, Blythe and Youngmee are trying to get some prime food truck real estate once again, but are beaten by the Biskits, thanks to their robot, Monban. He manages to recalculate the best route, and reprogram nearby traffic lights to… wait. What!? Pretty sure that’s illegal. I mean, yes, I’ve heard of devices that can reprogram traffic lights. I remember seeing one on Nash Bridges of all shows. But even if it was real, there’s no way a civilian would own one!

But it’s after witnessing all of this that Russell comes up with an idea. It’s based on the assumption that there was no way Monban would’ve been programmed to commit vehicular manslaughter. The plan is simple: slow the Biskits down by using the crosswalks at the right times. 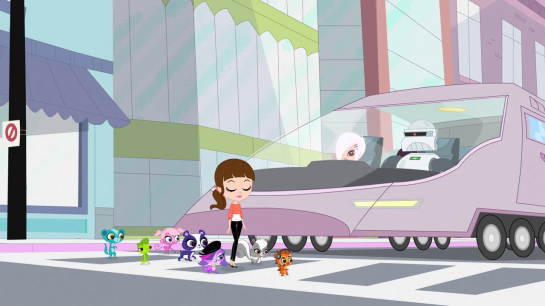 It works, but why doesn’t Blythe try to milk it a bit more? Just lean on the hood of the car and say, “Hey, what’s up? Lovely day for a walk, isn’t it?”

But no, she crosses at a normal speed, with the pets, and then has to beat them to the next intersection, by running like hell. There are eight of them. Why not just have each pet wait at an individual crosswalk, and wander in the middle at the appropriate time? I guess they’re assuming he’ll only stop for humans. But why are the pets even there? I guess to give Blythe reason to linger just a bit longer.

So it works, and they’re able to slow the robot down. But at the second stop, things don’t work out so well.

And this soda is really sticky. It seems to be 97 per cent syrup. So it slows them down so much that they fail to make it to the next crosswalk, but are still, somehow, just a stone’s throw away.

If only Sunil really did have superpowers, Penny muses.

Then Sunil remembers something…

He asks Penny to scare him. She does, and he screams in horror. Summoning an army of dogs

Yeah, you thought that was just a one-shot gag, didn’t you? Nope, they managed to work that into the plot! It’s great! Those are the best jokes, the ones with plot significance.

So Christie claims the spot, the Biskits are defeated, the sandwiches are a hit, and everyone’s happy.

And I really liked this episode. It was entertaining, and fun, and it featured Sugar Sprinkles. And if I could make one complaint, it’s that there wasn’t enough Sugar Sprinkles.

And to make things better, there are several lessons here. The first is, don’t let your friends think they actually have superpowers, otherwise they’ll jump out a window and die. And the other message is, everyone’s got their strength and weaknesses, and they’re all unique to everyone. That may sound cheesy, but it’s true. And we shouldn’t judge ourselves by what we don’t have, but by what we do have. And we shouldn’t judge others that way either.

That’s right, I just compared dude-bro gamers to racists. And I don’t see a problem with that.